So me and @Anarchy219 @Infinity Shun were discussing about if we should allow self-published fiction (basically those stories that anyone can make at any time on those free webnovel sites) on the wiki or not, and this CRT will try to settle the standards regarding this.

Basically, the proposed reasoning is to initially allow them, but fear not. Not all of them would be allowed, and even then it would need to meet some conditions first. Those would be:

Yes, we agree it shouldn't be here.

Before (in this post) some SCP could be here

We already had a separate thread about SCP.

We "debated" here too 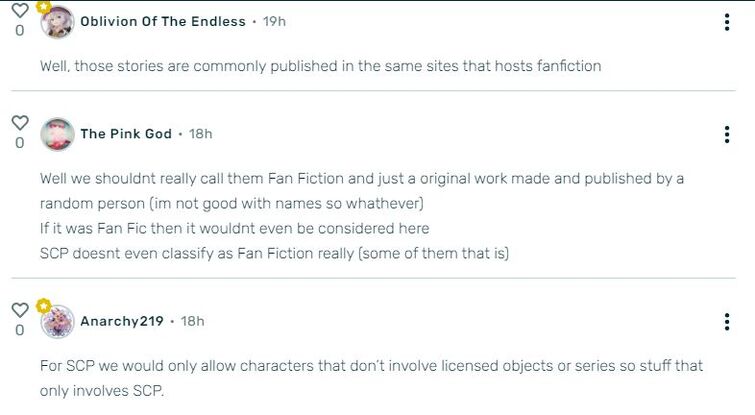 I suppose that was the conclusion

There was no conclusion to the SCP discussion that was on this thread, just Anarchy saying his proposal and then people just moved on with the OP without adressing it.

Then, it should be another theard, and actual it would be better, just argue about it.

SCP Foundation | FandomSo me and @Oblivion Of The Endless have been…all-fiction-battles.fandom.com

Like that’s not a permanent thing if we have enough requests for it to be added we would just retake votes. The requirements might change a little though.

@The Narrator of Narratives you can close this and we can add unlicensed verses/series and I’ll remake the CRT for SCP since we have more members.

Alright, thanks everyone for the input.