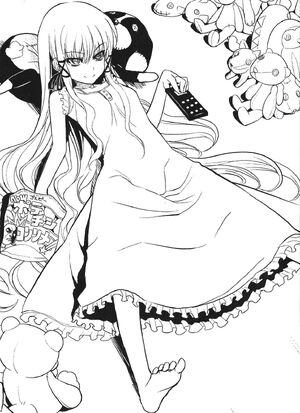 2V is an antagonist in Ichiban Ushiro no Daimaou. She's a member of CIMO 8, the twin of Empress Kazuko who uses L'Isle Adams to act on her place and wants to free Zero from the virtual alternate dimension to become the Empress who rules over the entire world.

Age: Unknown, but it is said to have lived way longer than any ordinary human

Powers and Abilities: Superhuman Physical Characteristics, Longevity, Magic, Technological Manipulation (Yata no Kagami allows her to transfer her will into L'Isle Adams so they can disobey their programming and instead follow her orders), Hacking (Can hack the High Priest's computer), Energy Projection (Can create mana balls), Danmaku (The special technique of the imperial family allows her to create countless mana spheres at the same time). Her L'Isle Adams have: Superhuman Physical Characteristics, Immortality (Type 6; Can transfer her will into a different L'Isle Adam if the one she's currently using is destroyed), Mind Manipulation via Poison Manipulation (One her dolls that take the form of a snake can inject a poison that puts the target under 2V's control), Teleportation, Flight

Attack Potency: At least Small Building level, at most Building level by herself (Should be superior to Act 1 Akuto Sai, Lily Shiraishi required some effort to counter her mana balls). Building level with L'Isle Adams (Able to fight against Lily)

Speed: Unknown by herself, Subsonic with L'Isle Adams (Can keep up with Lily)

Lifting Strength: Unknown by herself, Class 5 with L'Isle Adams (Should be comparable to Zero's)

Stamina: She's an extremely lazy girl who never stands up, so her true stamina is unknown, however, her L'Isle Adams can fight indefinitely.

Intelligence: She is a master strategist with vast knowledge on three-dimensional combat and can command legions of aircraft. She is a highly skilled hacker who can dig and bypass the defenses of the system of the gods and access data not even the High Priests have seen before. Can memorize large amounts of information after reading them once.