All Fiction Battles Wiki
Register
Don't have an account?
Sign In
Advertisement
in: Characters, Record of Ragnarok, Male Characters,
and 19 more

Adam is the father of humanity and a major character in Record of Ragnarok. He was made in God's image and is considered to be the human Nº 00000000001, as well as humanity's greatest trump card in the events of the Ragnarok.

Powers and Abilities: Superhuman Physical Characteristics, Immortality (Types 1 & 7; He is already dead), Martial Arts (Type 1), Non-Corporeal, Fusionism & Soul Manipulation (Capable of fusing his body and soul with a Valkyrie), Passive Power Mimicry (Can copy any technique or ability that he sees with the Eyes of the Lord. This also allows him to copy transformations and biological powers), Reactive Power Level (His copied techniques are faster and stronger than the original user), Time Manipulation, Willpower Manipulation & Instinctive Reaction (His willpower was so strong that his body was still capable of fighting even after death), Social Influencing (A simple speech from Adam motivated the whole crowd to cheer for him, as well as uniting the whole humanity), Afterimage Creation

Speed: FTL (Can keep up with Zeus), At least Massively FTL+, possibly Infinite with The Fist That Surpassed Time (Evaded a punch that happened in 0.00000000000000000000... seconds before the rest of the timeframe could be seen)

Stamina: Extremely High (Capable of fighting even after exceeding his own limits, where his entire nervous system was being under an unimaginable amount of pressure. His body kept up trading blows with Zeus even after his own death)

Intelligence: Above Average (Adam has shown to possess a certan degree of mastery over hand-to-hand combat and managed to trick Zeus into punching him so he could accurately catch the position of the former when blind)

Weaknesses: His body will overheat if he uses The Eyes of the Lord too much, which starts to cause immense stress over his nervous system. 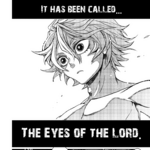 The Eyes of the Lord: Adam's special technique that he was gifted with due to being made in God's image. With it, Adam can copy every technique and abilities his eyes lays upon once regardless of its speed and power. The Eyes of the Lord enables Adam to see through his opponents' techniques even if they're Gods. By seeing through his opponents' techniques this does not only provide Adam the means to dodge their attacks but also perfectly copy it and even return it right back at them, allowing him to perform those powers even faster and stronger compared to the original user. As stated by Brunhild, Adam's true power relies on the fact that he uses the Gods' own pride and arrogance against them. This also allows Adam to copy transformations and biological powers, which might change his own body.