All Fiction Battles Wiki
Register
Don't have an account?
Sign In
Advertisement
in: Characters, Antagonists, Male Characters,
and 19 more 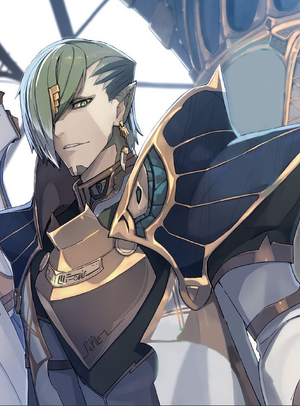 Powers and Abilities: Superhuman Physical Characteristics, Longevity, Extrasensory Perception, Immortality (Types 3, 4 & 8. He will be constantly revived as long as Arcana exists), Regeneration (High-Godly. Even if his body and source are destroyed Arcana will still reform him and regenerate all of his wounds), Limited Reactive Power Level (The torch flares up with renewed vigour just before it extinguishes, and uses it to overcome extinguishment. In other words, as a person approaches their own death, they gain a permanent yet limited increase in power, which they can then utilise in an attempt to prevent their own death), Invulnerability (He was granted invulnerability by <Livaingirma>. His body is eternal, unchanging, and cannot be harmed by any attack, including source destruction, unless <Livaingirma> is used against him. However, those who tries to wield this sword gets instantly conceptually erased from past, present and future, making Ahide very hard to affect/damage), Summoning (Can summon Arcana, although she helps him even when not directly summoned), Resistance Negation (Gods' powers can only be resisted by other gods), Ice Manipulation (Can instantly freeze his opponents), Teleportation (Can teleport to any place he has been before with Gatom), Clairvoyance (Constantly receives Oracles and visions by Eques)

Attack Potency: Wall level (Ahide himself doesn't have much feats physically, but should be comparable to other low tier characters, and relies mainly on Arcana), Large Planet level via Arcana

Speed: FTL (Could keep up with Anos Voldigoad)

Durability: At least Large Planet level (Unaffected by almost all of Anos' attacks. Only the eyes of purple destruction which destroys order were able to harm him)

Intelligence: Above Average (If not stopped by Anos his plan was going to destroy all of Azeshion)

Weaknesses: He is very arrogant and blindly believes on the blessings of the Almighty Eques. If he is slashed three times by Levine Girma he will die.