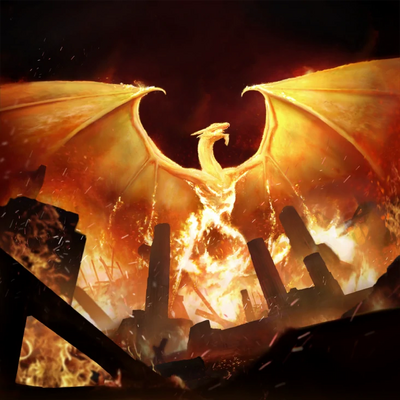 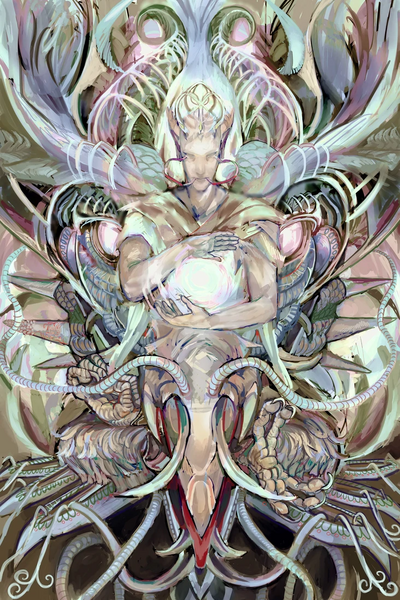 Akatosh, known as Auri-El (or Auriel) to the Aldmer and Bormahu (Father) to the dragons, and Alkosh to the Khajiit is the chief deity of the Eight or Nine Divines (the prescribed religious cults of Cyrodill and its provinces). He is present in most Tamrielic religions. His avatar is a golden dragon,and he is often called the Dragon God of Time. He is generally considered to be the first of the Gods to form in the Beginning Place; after his establishment, other spirits found the process to be easier and the various pantheons of the world emerged. The Aedric spirit is the ultimate God of the Cyrodilic Empire, where he embodies the qualities of endurance, invincibility, and everlasting legitimacy while promoting the virtues of duty, service, and obedience.Akatosh is thought to be the father of all dragons, and their leader Alduin was titled "First-Born of Akatosh". He is the Soul of Anui-El and the opposite counterpart to the Missing God of Change, Lorkhan, the Soul of Sithis. Their simultaneous birth gave shape to the primordial chaos, and was what allowed the Et'Ada to crystallize and erupt from ineffability into being. So that order could be brought into the cacophony that was Existence, Aka mutilated himself, shattering his spirit into countless fragments and "bleeding" into the Aurbis as the concept of Time which he now embodied. As a result of this sacrifice, Aka's became divided into various shards of itself, making it so that his spirit was no longer that of a unitary Et'Ada, but of a multitude of aspects. Henceforth and forever after.

Name: Aka, the Dragon God of Time. Known by many names, such as Akatosh, Auri-El, Alkosh, Alduin, Ald Son of Ald, Ruptuga, AKHAT, the Aka-tusk, and Tosh Raka. Called Bormahu in the Dragon Tongue, The Dragon God, The Time Dragon, The Firstborn, The First God, The Forefather of All, The Father of the Gods, The King of Heaven, The Dragon of Heaven, the King of Time, The King of the Gods, The First Cat, The Tall Papa, The Supreme Spirit, The One, The Misassembled Dragon, The Worm

Attack Potency: High Hyperverse level (The Avatar of Akatosh easily destroyed the complete form of the Daedric Prince Mehrunes Dagon, reducing him to ash with its fire, and immediately afterwards reforged the barriers between Mundus and Oblivion, separating the two realms and rendering the boundaries that split them stronger than ever) | High Hyperverse level (Created and embodies the concept of Time, which stabilized the entire Aurbis from the primordial Chaos. Afterwards, his aspects were likely among the Ada who assisted in shaping the Aurbis from its unformed energies, forming the anuic realm of Aetherius) | Ascendent level, possibly Ascendent level+ (In their Original State, the Et'Ada were Boundless, Eternal and Infinite Spirits who existed wholly independently of duality, predating the concepts of Time and Space and Hyper Angles, referring to Higher Dimensions, having almost no will nor personalities as result of their limitless power. As the direct manifestation of Anui-El, Akatosh is considerably more powerful than the other Original Spirits and possibly scales to the Telescope of Wheels due to being the avatar of Anui-El, thus is comparable to his mirror-brother Lorkhan)

Durability: High Hyperverse level (Completely unharmed by the attacks of Mehrunes Dagon) | High Hyperverse level (One of the most powerful Et'Ada of the Aurbis, being the very concept of Time which keeps all of existence and its infinitely-dimensioned realms from dissolving back into the primordial chaos. Alongside Trinimac, could do battle with Lorkhan and endure his attacks) | Ascendent level, possibly Ascendent level+

Range: At least Low Complex Multiversal (Reforged the boundaries that separate the realms of Mundus and Oblivion) | Ascendental (Permeates through the entirety of the Aurbis and is described as a spirit who exists on its very apex. Immeasurably superior to powerful Daedra. Held a convention outside and beyond Aurbic Time along the remaining Et'Ada) | Ascendental, possibly Ascendental+

Weaknesses: As a consequence of the very multifaceted and nonlinear nature of Time, Aka's mind is broken into numerous shards and he is rendered completely insane.

Feats: Created the concept of “Time” what gave order and stabilization to the Aurbis, his mere avatar easily defeated Daedric Prince Mehrunes Dagon at his prime, alongside his greatest champion Trinamec, fought and defeated Lorkhan