All Fiction Battles Wiki
Register
Don't have an account?
Sign In
Advertisement
in: Characters, Villains, RPG Characters,
and 47 more 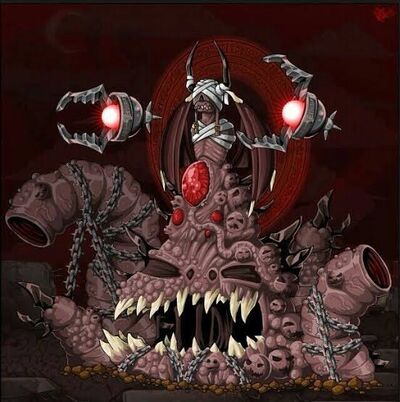 Akron is the main antagonist and final boss in Epic Battle Fantasy 3. An ancient demonic deity who has lived for billions of years, he was sealed away by the ancient peoples due to his potentially world-shattering power. However, he was accidentally awakened by the heroes themselves at the beginning of the game.

Attack Potency: Large Star Level+ (Created a Black hole which was expanding over the Solar System which was this powerful) | Solar System level (Far more powerful than it's previous incarnation)

Speed: FTL (Was able to move within his black hole and kept up against the main game party) | Massively FTL+ (Kept pace and fought against Matt, who is able to fly interstellar distances in a short time)

Lifting Strength: Class P (Should be comparable to Lance)

Durability: Large Star level+ (It took all the effort of the Main Characters to finally take down Akron) | Solar System level (Far superior than before)

Stamina: High (Showed no signs of tiring during his battles. Constantly drain the energy of Earth and its inhabitants)

Range: Planetary (Was draining the Earth of its power and caused storms to appear all over the planet) | Stellar (Warped the black hole at the center of the galaxy and used it as a pocket realm. Far superior to his previous incarnation)

Intelligence: Extremely High (Has billions of years of knowledge and experience, seems to have a clear recollection of history since the Earth was formed. Has apparently fought countless battles against countless enemies and has only seemed to have been defeated via sealing in the past [Before finally being slew by Matt, Natalie and Lance that is]. Has mastery over multiple weapons and schools of magic, from swords and guns to darkness and healing)

Weaknesses: His weaknesses can change on the fly, but can be weak to Fire, Ice, Earth, Wind, Light, Explosion, Lightning, Dark and Poison-based attacks