All Fiction Battles Wiki
Register
Don't have an account?
Sign In
Advertisement
in: Characters, Genderless Characters, Dragons,
and 41 more 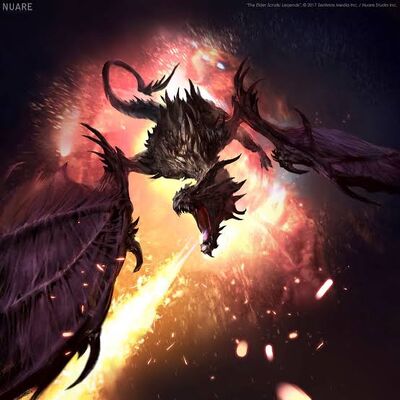 Alduin (Meaning Destroyer-Devour-Master in Dovahzul) is the oldest and mightiest of the Dragons, and the Nordic Aspect of the Dragon God of Time, Akatosh. He is known as the World-Eater, for his role in devouring the old world so that the new world can be born. However, Alduin doesn't literally eat the world, but rather consumes Time itself, destroying the current iteration of reality and bringing about the beginning of the next in process which is known as the Kalpic Cycle

Alduin was once considered the greatest of Akatosh's creations.According to the writings of Archmage Shalidor, dragons had existed since the advent of time, but were initially as wild as anything else. It was Alduin who created their civilization

In his arrogance, Alduin had strayed far from the righteous path in favor of conquering Mundus. It was Alduin's increasingly tyrannical ways that convinced Paarthurnax to start a rebellion together with Nordic allies and some Dragons.Paarthurnax instructed several of them on how to use the Thu'um, which they used together with an Elder Scroll to bring about Alduin's defeat by flinging him forward in time. Groups such as the Dragonguard and Greybeards made sure to preserve his legend so the people of the future would remain wary

In 4E 201, Alduin reappeared near the Throat of the World, from where he had been banished thousands of years before, and decimated the town of Helgen. As the World Eater set about resurrecting dragons loyal to him, the Last Dragonborn was revealed and sought to stop him. Though the Dragonborn took the souls of many of Alduin's soldiers and learned a shout that forced Dragons to experience mortality, their leader proved to be seemingly invincible in Mundus, eventually the Last Dragonborn gained access to Sovngarde, with the help of Nordic heroic spirits, and slayed the World Eater completely.

Name: Alduin (Also called Ald'uin, Thartaag, Ald Son of Ald). Known by many titles, such as The World-Eater, The Time-Eater, The Epoch-Eater, Firstborn of Akatosh, The Dragon God

Gender: Inapplicable. Referred to as male

Attack Potency: Low Macroverse level (Alduin was devouring the linear time of Mundus, which is a higher dimensional plane, that contains the Mortal Multiverse, which contains infinite timelines, and also Moons, which are in fact 5 dimensional metaphysical constructs of infinite size and infinite mass, destroying the very laws of reality as defined by the Ehlnofey and resetting everything back to the Dawn Era. Can cause Dragon Breaks with his power), higher (Became even more powerful by gorging on the souls of the dead in Sovngarde. His death was said to have echoed throughout all of Time by Paarthurnax, reverberating across all Eras of the world)

Speed: Immeasurable (Is unbound by the concept of linear time and exists outside of it, living in the spaces between Kalpas. Capable of literally flying through the currents of time, going from Nirn to Sovngarde which lays beyond the infinite void of oblivion with sheer speed), higher (After absorbing the Souls of Sovngarde)

Range: Low Macroversal (Can destroy the whole time of Mundus), up to Ascendental (Can travel from Nirn to Sovngarde which is located on Aetherius with ease)

Intelligence: Incredibly High. As the first and most powerful dragon, and who predated the creation of Nirn and mundus in the Dawn Era. As a major shard of the Dragon God Akatosh, and a direct aspect of Time itself, Alduin possesses vast cosmic knowledge over the nature of time and Creation as a whole. Ruled over all dragons until he was overthrown by a combination of Humans and Dragons.

Feats: Fought Paartunax, fought in a equally balanced battle with The Dovahkiin.