All Fiction Battles Wiki
Register
Don't have an account?
Sign In
Advertisement
in: Characters, Regeneration Users, Sound Users,
and 27 more 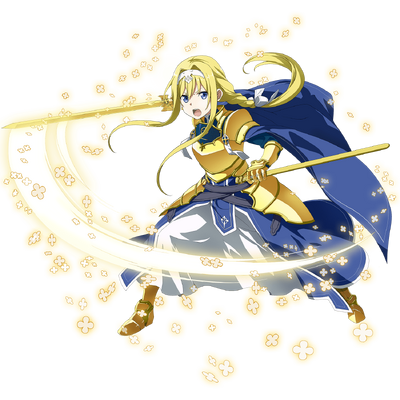 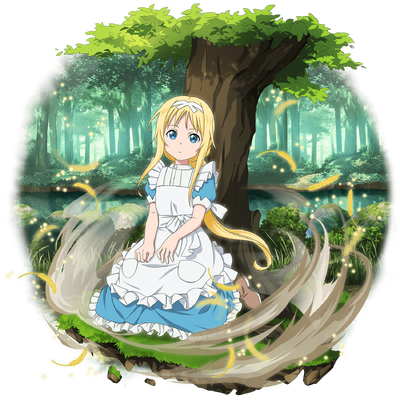 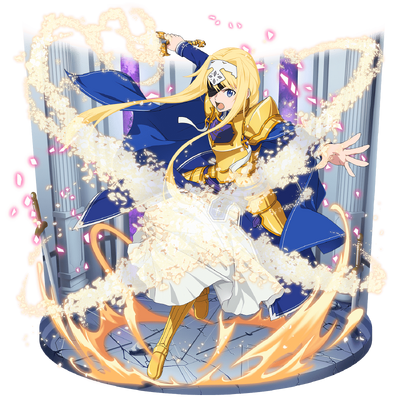 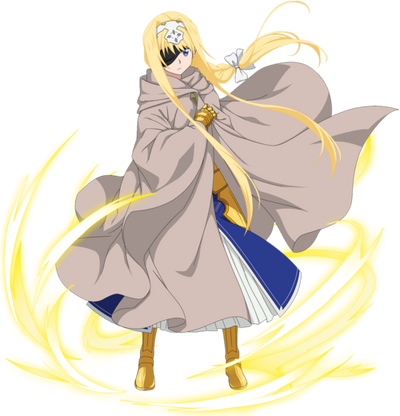 Alice Zuberg (アリス・ツーベルク, Arisu Tsūberuku) is one of the main characters in the Alicization Arc. She is the daughter of Rulid Village's chief Gasupht Zuberg, as well as the childhood friend of Kirito and Eugeo. Due to accidentally breaking a clause of the Taboo Index in her childhood, Alice was apprehended by Deusolbert Synthesis Seven and taken to the Central Cathedral, where she was forced to become an Integrity Knight, named Alice Synthesis Thirty (アリス・シンセシス・サーティ, Arisu Shinseshisu Sāti), with her memories sealed.

Tier: At least 9-B physically, higher with Sacred Arts, 8-C with Enhance Armament, 8-A with Release Recollection and Preparation

Powers and Abilities: Superhuman Physical Characteristics, Accelerated Development (Leveling; Physical Stats, Abilities), Immortality (Types 1; All Integrity Knights do not age due to their lifespan being frozen by the Administrator, 2), Self-Sustenance (Type 1; Can survive without oxygen in the depths of space), Statistics Amplification (Sword Skills amplify the user's speed and power, with the downside of leaving some post-motion stun afterwards), Swordswoman (Was able to strike fear into Kirito during their battle. Bercouli would not be sure who would come out on top if they sparred), Magic & Creation (via Sacred Arts. Can create a spell or an object for almost any situation, so long as she knows the words used to arrange her thoughts, guide her emotions, and fuel her imagination to create said spell or object), Light Manipulation (via Sacred Arts), Darkness Manipulation (via Sacred Arts. Primarily used to search for objects), Ice Manipulation (Can create ice structures via Sacred Arts), Heat Manipulation (via Sacred Arts), Healing (via Sacred Arts), Elemental Manipulation (via Sacred Arts. Can use the elements or elemental objects of all kinds), Homing Attacks (via Sacred Arts. Can make her Sacred Arts home in on enemies), Telekinesis (Only with her Osmanthus Blade's petals), Danmaku (via the Osmanthus Blade's petals. Can number from hundreds to thousands with Enhance Armament to tens of thousands with Release Recollection. Can also change the shape and size of said petals, enough to form entire walls and structures), Regeneration (High-Low; Can heal back an eye via Incarnation), Sound Manipulation (via Incarnation. Able to make sounds so loud such that everyone can hear her from a far distance), Resistance to Electricity Manipulation and possibly Law Manipulation (Broke the Seal of the Right Eye), Air Manipulation and Empathic Manipulation. Passive Reality Warping (via Incarnation. As with all VR avatars, especially in the Underworld, Incarnation grants all the ability to alter reality via their conscious and subconscious belief and willpower, and can be described as many people sharing a single dream, with greater control of Incarnation being likened to "lucid dreaming"). The primary applications of Incarnation are as follows: Empowerment, Statistics Amplification and Statistics Reduction (Belief in one's own strength will amplify one's own power, however the opposite can happen to the user as well if they are not confident in a matchup), Limited Law Manipulation (If enough people believe that something cannot happen, it will become impossible and vice versa), and Probability Manipulation (If an Incarnation user truly believes that they are weaker than their foe, even subconsciously, reality will be rewritten to ensure their defeat (and vice versa). If both sides are both completely confident in a battle, it will be a battle to see who's mental willpower is stronger than the other.), Immortality (Type 8; Characters in the Underworld can't die as long as their fluctlight isn't destroyed), Unconventional Resistance to Soul Manipulation and Matter Manipulation (The souls in Sword Art Online are described as being made of quantum fields)

Attack Potency: At least Wall level physically (Integrity Knights are considered to be worth hundreds of men alone. Is far stronger than Kirito and Eugeo physically, to the point where she struck fear into the former. Can effortlessly fell massive trees that multiple men cannot in a single chop, breaking all of the axes she uses whenever doing so), higher with Sacred Arts (Normally more powerful than standard physical blows), Building level+ with Enhance Armament (Comparable, if not superior to Deusolbert's own Enhance Armament), Multi-City Block level with Release Recollection and prep (Should not be any less potent than Kirito's Release Recollection. Can level an entire forest in minutes. By absorbing all of the spatial resources in one specific area of the Dark Territory over time, Alice was able to obliterate an entire valley, along with a large portion of the Dark Territory's forces)

Speed: Subsonic (Moved faster than what a normal person could see) with Relativistic reaction speed (Should be at least comparable to Kirito)

Lifting Strength: Superhuman (Should be superior to Kirito and Eugeo)

Durability: At least Wall level physically (Was not staggered at all by Kirito's blow, and instead she was the one who staggered him), higher with Sacred Arts (Kirito, someone who is stated to be less proficient in Sacred Arts compared to the other characters, was able to create ice barriers that held off Deusolbert's Enhance Armament for a second), Multi-City Block level with the Osmanthus Blade (Divine Objects can withstand their memory release forms, all of which are on this level. Her Osmanthus Blade's petals share the exact same Durability, which can be manipulated into walls to stop attacks)

Stamina: Virtually Infinite physically (Just like normal Virtual Reality Avatars, however the difference being that if one ran out of "stamina", they would begin taking damage to their Life), Vastly Superhuman mentally (Comparable to Kirito and Eugeo's willpower)

Range: Extended melee range with her sword, Kilometers with Perfect Weapon Control Art. At least Interstellar, likely Galactic with with Sound Manipulation and Air Manipulation (Her voice created a wind that blew throughout the whole universe which is directly compared to the Milky Way)

Intelligence: Academically high. Alice was able to swiftly learn Sacred Arts as a child, as well as become an Integrity Knight Apprentice, which required an intense education. Alice is also skilled at fighting, to the point where Bercouli, a man who has seen constant combat for over three centuries against a combat-focused society, wouldn't know who would win if the two sparred. Is proficient in speed chanting and is able to use advanced Sacred Art rituals.

Weaknesses: Was susceptible to the Administrator's whims with the Seal of the Right Eye, though after breaking the seal this weakness becomes a non-factor. Her petals need to recharge from the sun every once in a while. Sword Skills have a slight post-motion stun at the end of them in exchange for increased power. Most of the time, to activate Sacred Arts the user must chant out the words required to activate it. Sacred Arts require "spatial resources" to use, meaning that barren environments would lessen the effects of a Sacred Art. Because of Incarnation's passive nature based on the imagination and willpower of the individual, at worst, if the user thinks a situation is hopeless or impossible to succeed, Incarnation will instead have a negative effect and make that situation true.

Sacred Arts: «Sacred Arts» are System Commands in Project Alicization that residents of Underworld believe to be magic rituals. In reality, they are just words used to arrange thoughts and guide the emotions of the caster to make use of one's imagination power. Because of this, the imagination of the user may either improve or decrease the effectiveness of an art.