All Fiction Battles Wiki
Register
Don't have an account?
Sign In
Advertisement
in: Characters, Female Characters, Anime Characters,
and 15 more 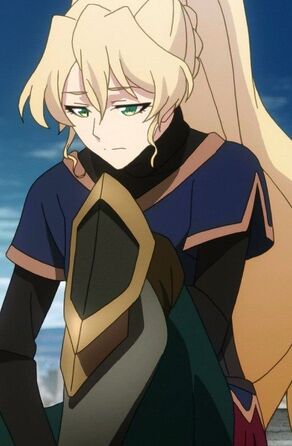 Alicetaria February is a young woman who is a noble's daughter, protagonist, and heroine of the fantasy genre epic manga and anime franchise titled Alicetaria of the Scarlet, which makes her the princess of the Holy Ulterstein Kingdom. In her world, she fights using the Götz von Berlichingen, passed down through the royal family, in order to save the world from the forces of Unterwelt summoned by the black sorcerer Peeping Eternity.

She first appeared to rescue Mamika from Yuya, She initially had supported Altair until she found out that Altair had killed Mamika. Alicetaria, unlike the other Creations, is very hostile towards her Creator and kidnapped him.

Powers and Abilities: Superhuman Physical Characteristics, Electricity Manipulation, Flight, Summoning, Energy Manipulation and Projection with Gotz von Berlichigen (Capable of firing out and manipulating energy), Conceptual Attacking (She may have been able to hurt Altair if she hadn't reversed the cause and effect), Magic, Statistics Amplification (She is able to boost her powers enough to hurt Altair), Enhanced Senses (All Creations can detect when another is nearby)

Lifting Strength: At least Atheletic human (Can wield a massive lance in one hand)

Durability: Large Building level+ (Can survive blows from those comparable to herself in strength). Town level with Gotz von Berlichigen (Enough to survive even a little after having suffered her own fatal attack

Intelligence: Unknown (While skilled in combat she is stubborn, unreasonable, and easily fooled)

Weaknesses: She is too attached to her feelings, violent, impulsive and she is very easy to manipulate

Alicetaria wields a gauntlet that she carries on her left arm at all times that has been passed down through the royal family.