All Fiction Battles Wiki
Register
Don't have an account?
Sign In
Advertisement
in: Sonic the Hedgehog, Self-Sustenance Users, Regeneration Users,
and 42 more 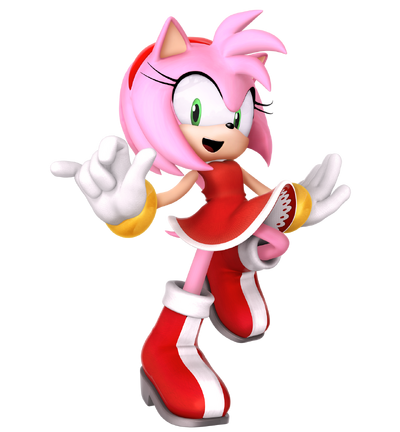 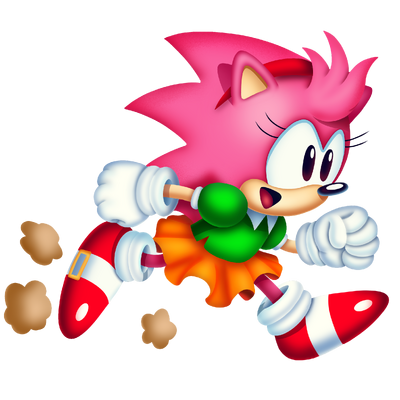 Amy Rose (エミー・ローズ Emī Rōzu?), also known as Rosy the Rascal (ロージー・ザ・ラスカル Rōjī za Rasukaru?), is a fictional character from the Sonic the Hedgehog series. She is an anthropomorphic hedgehog with a major crush on Sonic the Hedgehog. Since meeting Sonic on Little Planet, Amy has become his self-proclaimed girlfriend and has attempted to win his heart by any means during their adventures. She wields the Piko Piko Hammer, a powerful melee weapon which she uses with skills second to none and never leaves home without.

Amy is a cheerful, though slightly erratic girl, with a positive attitude and boundless energy. However, she has a scary temper and her infatuation with Sonic makes her shortsighted and a bit obsessive about him, having followed him everywhere since meeting him. Nevertheless, she has a pure heart and will not let anything stop her.

Superhuman Physical Characteristics, Self-Sustenance (Type 1), Regeneration (Mid. Can survive being crushed flat), Natural Weaponry (Through sharpening her spines), Weapon Mastery (With her Piko Piko Hammer), Vehicular Mastery (Drives a talking car in Sonic Drift), Can summon a massive hammer from seemingly out of nowhere which she can use for various attacks, Statistics Amplification (Can increase the speed of her attacks via Hyper Mode), Forcefield Creation (via barriers), Non-Physical Interaction (Can tag the Hyudoros, Boos, and King Boom Boo), Size Manipulation (Capable of shrinking opponents with her hammer by striking them), Clairvoyance & Curse Manipulation (Can use tarot cards to predict the future and lay curses on opponents), Resistance to Extreme Cold, Cosmic Radiations, Extreme Heat

Same as before, Acrobatics, Limited Instinctive Reaction (The Homing Attack is an automatic body movement that makes the user instinctively crash into an opponent's weak point), Can jump into the air and hit opponents with a Homing Attack, Skilled Hand to Hand Combatant, Invisibility, Can create tornadoes, Temporary Flight, Healing, Durability Negation (The Ichikoro Gauge allows Any to knock out the opponent in one hit once enough energy is transferred to it), Status Effect Inducement with Amy Flash and Resistance to it (With the Immunity Idol), Forcefield Creation (Of fire and electricity varieties), Invulnerability (With the Invincibility Monitor). With the Color Powers: Transformation, Fire Manipulation and Explosion Manipulation (With Red Burst and Black Bomb), Deconstruction (With Indigo Asteroid), Vibration Manipulation (With Blue Cube and Gray Quake), Energy Projection (With Cyan Laser and Crimson Eagle), Electricity Manipulation (With Ivory Lightning), Invisibility (With Jade Ghost), Transmutation, Pseudo-Black Hole Creation, Gravity Manipulation, Size Manipulation, and Absorption (With Indigo Asteroid, Violet Void, and Purple Frenzy), Intangibility (With Violet Void), Flight and Levitation (With Crimson Eagle, Green Hover, Indigo Asteroid, Magenta Rhythm, Orange Rocket, and Violet Void), Void Manipulation (With Violet Void) Resistance to Extreme Heat (Can survive the heat of falling directly into a star), Death Manipulation (Can traverse through areas near Void and can interact with him, in which his presence alone killed off the life within the Nature Zone before it was restored)

Statistics Amplification (With Speed Shoes, Golden Gloves and Speed Bar), Elemental Manipulation (Of Water, Electricity, Ice, Wind, and Earth varieties via elemental Rings), Fear Inducement (With the Spooky Charm), Resurrection (With Angel Amulet and Ring of Life), Life-Force Absorption (With Nocturne Blade), Transmutation (Via Ring Time), Paralysis Inducement (Via Stun), Gravity Manipulation and Psuedo-Black Hole Creation (With the Ark of the Cosmos), Purification (Type 3 with Cure All Spray). With Chao: Statistics Amplification (With Cheezlet and Blayze, attacks do much more damage), Damage Reduction (With Velk and Gibber, damage from attacks are greatly reduced), Healing (With Stebsly and Joy, vitality is regenerated over the course of a fight), Resurrection (With Ovus, their partner is automatically brought back up to three times in one battle), Probability Manipulation (With Koolet, Belgog, Fimbley, and Stugs, enemy attacks have a greater chance of missing. Churdle and Oldarg give a higher chance of hitting the opponent. Keroyo increases the chance of an enemy fleeing. Spartoi grants a chance to instantly knock out the opponent with every attack done), Shield Creation (Can make passive shields of fire, water, wind, lightning, and earth that stay even after being hit), Elemental Manipulation (Can imbue her attacks with fire, water, wind, lightning, earth, and ice), and Damage Transferal (With Pooki, damage taken is split between teammates). With Forcejewels: BFR, Barrier Creation (Can create barriers for a limited amount of time that others can't pass), Teleportation (Can teleport others to himself, teleport himself to others, swap places with an opponent, or teleport himself or others to a random location), Body Puppetry (Can force an opponent to move or use their items)

Attack Potency: Large Planet level (Comparable to Classic Sonic and Classic Knuckles) | Large Planet level (Comparable to Adventure Sonic and destroyed ZERO in Sonic Adventure. Managed to fight against the same Sonic at the time of Sonic Heroes alongside Team Rose) | Small Star level (Can eventually fight alongside Sonic after the events of Sonic Battle and as part of the resistance in Sonic Forces)

Speed: FTL+ (Can keep up with Classic Sonic) | At least FTL+ (Comparable to Adventure Sonic and is superior to her Classic self. Managed to keep pace against him at the time of Sonic Heroes)

Stamina: Very high (Chased Sonic endlessly wherever he went without any sign of tiring and was able to keep pace against him twice)

Range: Extended melee range with her hammer. Tens of meters with tornadoes

Standard Equipment: Her Piko-Piko Hammer, which seems to run on Hammerspace logic. In Sonic CD, she used tarot cards, which predicted her future and knew about Sonic

Lifting Strength: Class 10 | Class M (Slightly comparable to Sonic and was one-fourth of the necessary force to halt the Riot Train, a massive locomotive)

Intelligence: At least Average (Skilled with her hammer and seemingly in hand-to-hand combat)

Weaknesses: Amy is somewhat short-tempered and moody, and is obsessed with Sonic to the point of being nearly rabid