All Fiction Battles Wiki
Register
Don't have an account?
Sign In
Advertisement
in: Characters, Genderless Characters, Gods,
and 33 more 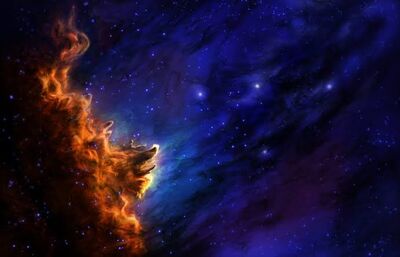 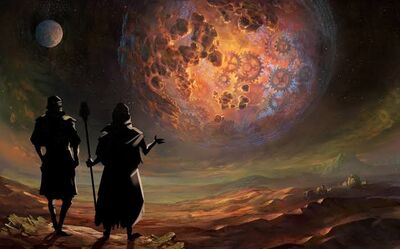 Anu, or Anu the Everything, is thought to be the quintessential form of Stasis, the anthropomorphization of one of the two primal forces (the other being Padomay, Change), have existed before Aurbis and the Void, and is often considered to exist within all things and personifies order, stasis, and light. According to some, most notably those who worship Padomaic beings, Anu was nothing but a static force incapable of consciousness, personality, intent or will, being depicted as an immutable static force that does not change. Other accounts of Anu testify to him as encompassing everything.

Their interplay of Anu (Light) and Padomay (Dark), created Nir, a feminine personification of the Aurbis and “The Grey” between the two brothers, Anu and Nir fell in love with each other, and she becomes pregnant with his seed. However, Padomay also loved Nir, and enraged with her rejection, murders her as she was giving birth to Anu's children. Anu then murders his brother in revenge. Finally, Anu is left alone in the Void, with a broken mind and a grieving heart, and so he hides and go to sleep and begins to Dream, ascending to the state of Amarath, dreaming the totality of The Elder Scrolls setting.

Name: Anu (Also called Anui-El, Ahnurr, Satak, Atak, and many other variations) | ANU, The Amaranth, The Godhead, Anu the Everything, The All-Maker, The Source, The Soul of All Things, The Everlasting Ineffable Light | God, The Uncaring Godhead, The Eternal I, ANEW AE I, The First Serpent, The Snake Who Came Before, The Great Root, The One Who Dreamt Anew

Classification: Primordial Concept of Stasis, The Everlasting Ineffable Light, The Soul of All Things, Mirror-Brother of Padomay, Grandfather of Akatosh | God, Amaranth

Attack Potency: High Ascendent level (Anu is the infinite, unconscious and eternal concept of Stasis, and Order, which transcends completely on a conceptual level both Sithis and Anui-El on a even greater scale than both transcends CHIM and all Æ, CHIM being the apex of mortal transcendence, which allows it’s user to scape from all concepts and laws defined by the Song of Creation, granting complete control over all of creation, and consequently transcending the Infinite Telescope of Wheels, which contains infinite “wheels” forming greater wheels, each wheel representing a higher infinity completely devoid from Spatial Temporal Dimensionality. Is the mirror-opposite of Padomay, the featureless Concept of Change, with both fundamental ideas being what define the entire Dream of the Godhead at its most primal level. Created Anui-El which is just an infinitesimal aspect of himself) | High Ascendent level (Ascended to the state of Amarath, becoming the underlying and expressionless Godhead, which is the Boundless final state of existence, that lies beyond all of creation, and from whose imagination came all phenomena, possibilities and scales, being devoid from all restrictions and illusions of space, time, dimensionality, causality, acausality, duality, reality, life, death, all concepts, laws and information, the final limitless transcendence, dreaming upon the totality of the setting, which includes the Dreamsleeve, a non-space that is devoid from all possible dimensionality and contains all magic in form of information, and lies as the deepest level of the Dream, standing even above Anu and Padomay, who are conceptually superior to the notions of Spatial-Temporal Dimensionality, and define the Dream and all of creation on it’s most primal level, trivializing CHIM and all Æ to insignificance, seeing all constructs mentioned as mere illusory and imaginary constructs)

Range: High Ascendental | High Ascendental level (Encompasses all structures in The Elder Scrolls setting, at the same time it “exists” completely above them, dreaming all of creation as lower plane from it’s perspective)

Intelligence: Inapplicable (Anu is fully impersonal and has no true consciousness or sentience, being merely the formless, primal concept of Stasis whose interaction with Change formed the Aurbis) | Inapplicable (The Amaranth is the fully impersonal and featureless unity devoid of all characterization, being the state of Infinite "Zero" from which all springs, rather than a sentient entity on its own)

Feats: Fought Padomay, it’s interplay with Padomay created Nir and the Aurbis, became the Godhead which created all structures in The Elder Scrolls setting, all of them being part of it’s endless dream