All Fiction Battles Wiki
Register
Don't have an account?
Sign In
Advertisement
in: Characters, Genderless Characters, Data Users,
and 26 more 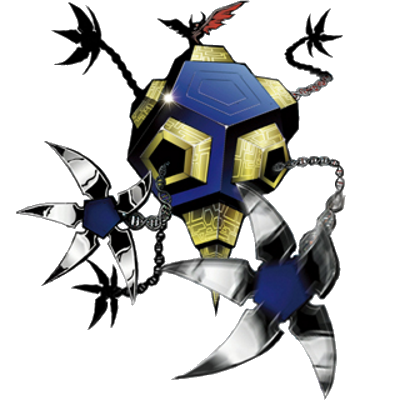 Apocalymon is a Dark Area Digimon and the main villain and antagonist of Digimon Adventure. It's purpose was to conquer the whole Digital World be cause he felt injustice due to him and other Dark Digimons disappear onto Oblivion while the other Digimons were living happily on the Digital World.

Superhuman Physical Characteristics, Pocket Reality Manipulation (Created his own dimension made of infinite darkness), Void Manipulation, Durability Negation (By teleporting Piedmon's swords onto others), Nonexistent Physiology (Type 2, is a natural inhabitant from Dark Area and therefore, lacks existence on a conceptual level), Corruption (Type 2; If touched, the Darkness will corrupt any new existence into a new darkness), Abstract Existence (Type 1; He is the very embodiment of Darkness and Non-Evolution), Acausality (Type 1), Space-Time Manipulation (His presence made time pass faster in the Digital World than in the Human World) Death Manipulation, Immortality (Type 5. Dark Area Digimons lack the concept of death), Hellfire Manipulation and Conceptual Erasure with Dark Fire (Can use the flames from the Hell/Dark Area, such flames are so powerful that can erase conceptual beings like the Seven Great Demon Lords with ease)

Data Manipulation (All Digimon can manipulate data for their own purposes) Reality Warping, Law Manipulation & Pocket Reality Manipulation (Reality is viewed, by Digimon, as just some normal computer program. That way, they are able to warp and change the structure of the very reality by changing the laws in whatever form they want to be), Reactive Adaptation (Digimon can rewrite their own structure to adapt to different situations) Immortality (Types 1, 3 & 4 (The last one is non-combat applicable). Digimon don't age and they can reform their Wireframe and if a Digimon dies, he'll just reincarnate), Higher-Dimensional Existence & Non-Corporeal (All Digimons are in fact, souls that exist on a higher plane of reality following an emanation cosmology that is transcending multiple levels of space-time. Their nature as higher souls makes them untouchable to lower-dimensional beings), Power Mimicry (Through absorbing opponents data, Digimon are able to assimilate their very abilities. Digimon in fact can learn the opponents's attacks just by observing them, but this is limited to the Digimon's intelligence), Inorganic Physiology (Type 1; Digimon are beings made entirely of data, lacking internal organs) Self-Sustenance (Type 1; Digimon don't need to breath) Mind and Soul Manipulation (Digimons are able to interact with each other's DigiCores, which are their very mind, soul and essence), Regeneration (Digimons are able to easily recover their Wireframes whenever it's damaged)

Resistance to Existence Erasure (As a natural inhabitant of the Dark Area, he is nonexistent), Death Manipulation (Dark Area Digimons lacks the concept of death), Absorption, Hacking & Power Nullification (Digimon are able to resist the bugging of the Eaters, which absorbs and corrupts data leaving them useless), Biological Manipulation (Digimon are composed entirely of data and lack internal organs) and Stronger Fire Manipulation (He was stated to be the Digimon that crossed the Firewall, which possesses flames worse than the Dark Fire)

Attack Potency: Hyperverse Level (He was able to easily power up the Dark Masters, the latter who defeated the Four Holy Beasts that were the gods of the Digital World, seeing the Digital World as nothing but a "Lower World")

Speed: Immeasurable (He's absurdly faster than the Four Holy Beasts and able to keep up with the DigiDestined and their Digimons alone. His mere presence alone caused time pass faster in the Digital World than in the Human World)

Intelligence: Great. (He possesses memories from billions of Digimons that died in their very evolutionary proccess)