All Fiction Battles Wiki
Register
Don't have an account?
Sign In
Advertisement
in: Characters, Female Characters, Gods,
and 21 more 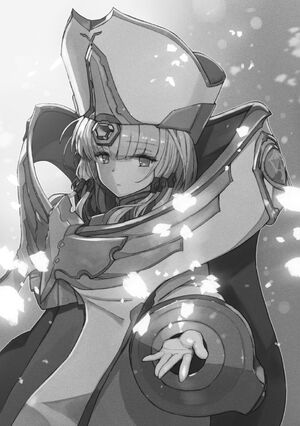 Powers and Abilities: Superhuman Physical Characteristics, Extrasensory Perception, Weapon Mastery (Type 1), Immortality (Types 1, 3, 4 & 8), Regeneration (High-Godly. All gods can regenerate from source (concept) destruction), Abstract Existence (Type 1. Gods maintain and embody the order and laws of the world), Limited Reactive Power Level (The torch flares up with renewed vigour just before it extinguishes, and uses it to overcome extinguishment. In other words, as a person approaches their own death, they gain a permanent yet limited increase in power, which they can then utilise in an attempt to prevent their own death), Power Absorption (She can absorb the Order of other gods, retaining their powers), Power Bestowal (Granted invulnerability to Ahide via <Livaingirma>), Resurrection (Constantly resurrects Ahide), Memory Manipulation, Weapon Creation, Teleportation (Can teleport to any place she has seen before with Gatom), Ice Manipulation (Can instantly freeze her opponents with her sword), Creation, Law Manipulation, Conceptual Manipulation (Type 2; Can freeze the surrounding area and opponents on sight to the extent that they can never melt, and can subsequently summon the Month of Creation, in which new things are created and born via Militia's authority, the Moon of Creation <Artieltonoa>, which utilises the Order of Creation. Arcana's divine eyes of treason are capable of destroying all magic, reshaping all things, and disrupting all order), Resistance Negation (Gods' powers can only be resisted by other gods), Forcefield Creation (Can create barriers of ice), Heat Manipulation (Can lower the temperature of her surroundings), Resistance to Fear Manipulation, Death Manipulation, Deconstruction, Sleep Manipulation, Mind Manipulation

Attack Potency: Large Planet level (Can harm a suppressed Anos Voldigoad). Universe level+ via <Artieltonoa> (Can utilise Militia's authority, the Moon of Creation <Artieltonoa>, which freezes the surrounding area and opponents on sight, and can subsequently summon the Month of Creation, in which new things are created and born, which also created the Militia World)

Speed: FTL, up to Massively FTL+ combat speed and reactions (Can exceed the speed of light and keep up with both Shin Reglia and Anos Voldigoad)

Standard Equipment: The Sword of the Almighty <Livaingirma>