All Fiction Battles Wiki
Register
Don't have an account?
Sign In
Advertisement
in: Characters, Female Characters, Longevity Users,
and 26 more 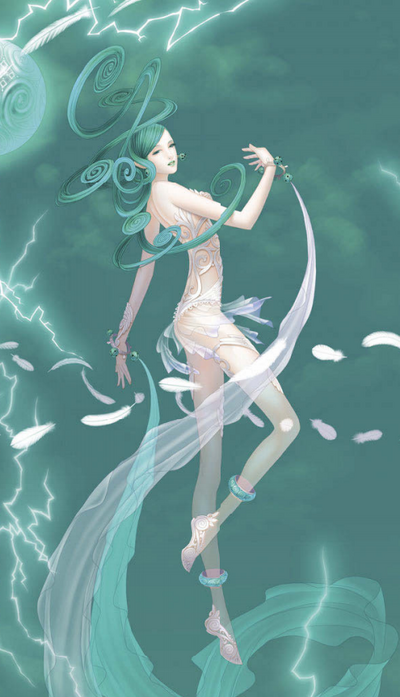 Queens of the Winds, Ladies of the Sylphs, Bringers of Storms. The Arias Vayu, the highest-ranking air elementals, are known by many names. Their bodies are composed of a mass of wind currents and power condensed by the tremendous spiritual energy that gave them birth. They have no definite shape, but they frequently observe exceptionally beautiful mortal women and then simulate their appearance. They consider the looks of the woman they are emulating to show their true self.

The Arias Vayu can take on a solid form at will, unlike the more ethereal Sylphs. Their hair color is always blue or green, and their clothes (composed of hardened wind currents) float around them giving them a regal and stately appearance. Their personalities are as fickle and changeable as the wind; they typically behave capriciously, showing responsibility only in more serious matters or to keep promises (which, once made, are never broken). While in the past they were directly involved in the affairs of mankind and many other races, after their involvement in the War of God, their interactions with the mortal world have diminished. Now, they generally travel from place to place unseen by man and with little interest in worldly affairs.

Superhuman Physical Characteristics, Longevity, Acrobatics, Social Influencing, Extrasensory Perception (Able to feel the the alterations to reality in the surroundings and read the aura of people, discerning their supernatural abilities and in what specific places they have been), Information Analysis, Resistance Negation (Beings of high Gnosis can completely ignore resistances and invulnerabilities. Can bypass immunities to magic, psychic powers, and elements), Law Manipulation & Spatial Manipulation (Those with high amounts of Gnosis can alter the laws of reality and space itself), Non-Physical Interaction, Immortality Negation (Types 1, 3, 4, 5 & 8. Negates these immortalities for beings with Gnosis a fair amount higher than their own. Beings of 30 Gnosis can permanently kill Al-Djinn, disregarding its immortalities), Regeneration Negation (Low-Godly), Invisibility & Intangibility (Due to her body being made of air currents she is intangible and virtually invisible), Air Manipulation (Given the innate control that an Arias Vayu has over wind currents, wind is its main method of attack. She can generate huge blades of concentrated air and throws them against its enemies), Damage Reduction (Reduces damage by half with Wind Crystal), Electricity Manipulation (Can create a powerful ray of electricity), Statistics Amplification (Typhoon Crystal increases her attack damage), Weather Manipulation (They have immense control over the weather, being able to create storms all around Gaia), Magic, Reality Warping, Soul Manipulation & Conceptual Manipulation (Type 2. Magic manipulates the essence or soul of existence to produce desired effects on the absolute pillars that makes up reality. Arias have a Gnosis value of 30, granting them abnormal control over the Soul Flux and the ability to ignore its influence)

Intelligence: Gifted (Noted to possess immense talent over the manipulation of the weather and combat skills. Fluntly speaks all languages)