All Fiction Battles Wiki
Register
Don't have an account?
Sign In
Advertisement
in: Characters, Reality Warpers, Eldritch Horrors,
and 12 more 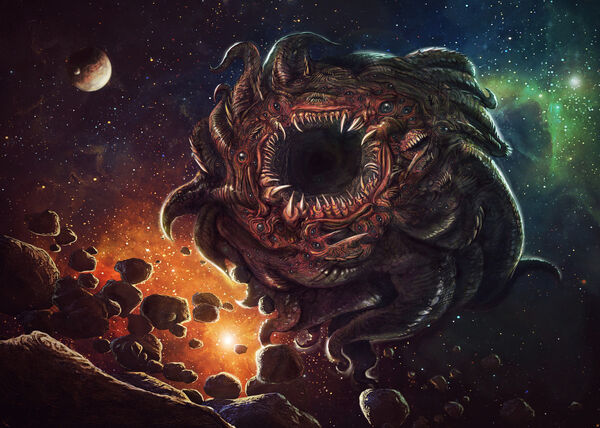 Azathoth is the supreme being of H.P. Lovecraft's Cthulhu Mythos. Often referred to as the "Blind Idiot God" or "Daemon Sultan", it rests in the center of existence, eternally slumbering as a band of countless Outer Gods play horrid, chaotic music and dance around it. This music is performed in hopes of keeping Azathoth asleep, for all existence is no more than the formless monster's dream. Were it ever to awaken, there would be worlds nor gods, no more, and all would once again be Azathoth

Classification: Ruler of the Outer Gods

Attack Potency: High Ascendent level (Azathoth sees all of the Cthulhu Mythos verse as nothing but a dream and everything in it will be destroyed when it awakens. This existence includes beings such as Yog-Sothoth, who embody all that is and isn't, also containing an infinite number of dimensionless, limitless beings who can control anything below them as they see fit)

Durability: High Ascendent level (every concept that exists and don't is part of Azathoth dream and cannot even affect him)

Note: Proof that all of creation is Azathoth's dream: