All Fiction Battles Wiki
Register
Don't have an account?
Sign In
Advertisement
in: Characters, The Elder Scrolls, Book Characters,
and 75 more 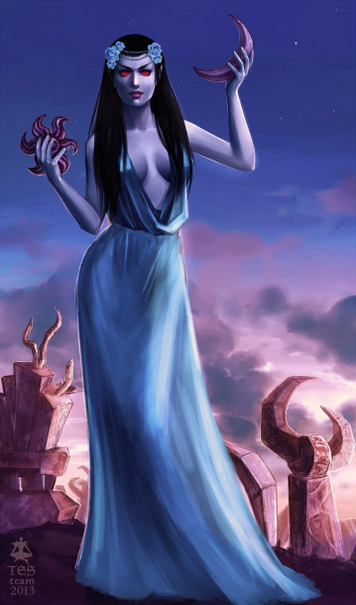 Azura, the Queen of Dawn and Dusk, also known as Azura of the Crimson Gate, the Mother Soul, Moonshadow, Mother of the Rose, Queen of the Night Sky, and the Rim of all Holes, the Cosmic Severer, and called Azurah by the Khajiit, is a Daedric Prince whose sphere is dawn and dusk—the magic in-between realms of twilight—as well as mystery and magic, fate and prophecy, and vanity and egotism. Azura is one of the few Daedra who maintains the appearance of being "good" by mortal standards, and reportedly feels more concern for the well-being of her mortal subjects than other Daedric Princes. It is said she wants their love above all else, and for her worshippers to love themselves; it pains her when they do not. This attitude leads to an extremely devoted following. She is also one of the few Princes who constantly maintains a female image, and is perceived accordingly. In Khajiiti creation myths, Azurah is credited with introducing moon sugar to Khajiit, and this belief is also told within tales aimed at Khajiiti children. The Five Songs of King Wulfharth claims that Alandro Sul is the immortal son of Azura. While Azura is considered one of the "good" Daedra by the Dunmer of Morrowind, elsewhere she has been known to be allied with Molag Bal, who is known to the Dunmer as one of the Four Corners of the House of Troubles. The people of the Iliac Bay region believe that Azura bewitches some of her followers to become her "lovers" and "virtual slaves". Her followers acknowledge that she is "cruel but wise". In addition to being one of her many sobriquets, "Moonshadow" is also the name of Azura's realm in Oblivion. Azura's Star, the Twilight Star, is visible at dawn and dusk low on the horizon below the constellation of the Steed. She is considered an enemy of Ebonarm and Nocturnal. Her summoning day is Hogithum, a festival on the 21st of First Seed.

Name: Azura, Queen of Dawn and Dusk, Azura of the Crimson Gate, the Mother Soul, Moonshadow, Mother of the Rose, Queen of the Night Sky, and the Rim of all Holes, the Cosmic Severer

Attack Potency: High Hyperverse level (Azura is a Daedric Prince which maintains and comprises Oblivion, and is one of the Ruling Princes and holds a great piece of oblivion in which he holds absolute control of, she was also one of the original Et'Ada who created oblivion) | Ascendent level (In her Original State Before creating Oblivion, she was an Et'Ada who were Boundless, Eternal and Infinite Spirits who existed wholly independently of duality, predating the concepts of Time and Space, and living in pure harmony, having practically no personalities or boundaries that separated themselves from anything else, inhabiting creation in its original Zero-State of pure Infinite possibility, where everything that can and cannot happen is always happening all at once, forever, regardless of contradictions)