All Fiction Battles Wiki
Register
Don't have an account?
Sign In
Advertisement
in: Characters, Female Characters, Vampires,
and 32 more

Benetnash is a vampire, founder of the Kingdom of Mjolnir, and one of the Seven Heroes who confronted Ruphas centuries ago. She considers herself Ruphas' rival, playing as a minor antagonist during the arc of A Wild Vampire has Appeared!. Later she joins forces with Ruphas and helps her on the fight against the Ouroboroses, and eventually against Alovenus herself.

Superhuman Physical Characteristics, Natural Weaponry, Martial Arts (Type 3), Immortality (Types 1, 2, 3 & 4. Vampires can revive infinitely at night), Regeneration (High-Low. Can reattach severed limbs instantly), Fear Manipulation & Aura (She has a very intimidative aura, which can incapacitate those of lower levels and weak minds), Non-Physical Interaction, Danmaku (Capable of releasing thousands of projectiles to carpet bomb her targets. Can carpet bomb the entire surface of Midgard), Darkness Manipulation (Can surround her dominion with darkness, forbidding the light of the sun from ever entering), Energy Projection (Can condense and shoot a large beam of light), Creation (Arcane Magic is the power to create something from nothing), Probability Manipulation (Has a 100% chance of evasion from enemy attacks), Life Absorption (Can absorb the enemy's HP for herself upon attacking), Empowerment (Becomes stronger in nights of full moon), Resistance to Telekinesis (Could break off of Ruphas' telekinesis), Law Manipulation (Broke through the laws imposed by Alovenus' rules), Fate Manipulation, Plot Manipulation (Similarly to Ruphas, Benetnash exists outside Alovenus' scenario), Paralysis Inducement (Her movements cannot be sealed), Mind Manipulation, Memory Manipulation (Alovenus cant manipulate her thoughts or memories), Sleep Manipulation (Level 1000s can resist sleep magic), Perception Manipulation, Time Manipulation, BFR, Sealing, Power Nullification, Causality Manipulation, Resistance Negation (Like Ruphas, Benetnash exists outside the Goddess influence, making her invulnerable to Dina's abilities), Heat Manipulation (Unnafected by magma or heat even after traversing through Midgard's mantle)

All previous abilities, plus Higher-Dimensional Existence, Acausality (Type 5. When one becomes a deity, their human self vanishes from existence and history, as if they never existed. Gods are walking singularities who are unbound by all laws, providences and reason, being an existence that is an impossible probability that should have never been), Immortality (Types 1, 3 & 5), Regeneration (Mid-Godly, likely High-Godly. Even if Gods were to be erased alongside their soul, they'd come back instantly. Even if the very concept of HP from Gods is erased, they'd just come back as if nothing happened), Law Manipulation, Fate Manipulation & Conceptual Manipulation (Type 2. Gods creates concepts, laws, providences and limits on a whim, enforcing their own truths and rules by painting over the black canvas that contains and exists beyond all creation), Reactive Evolution (Merely believing that she is stronger allows her to be so. Battles between gods is a matter of will and ego, primarily and foremostly. In that way, Gods configure their settings according to their opponent, and thus will always be above them. As a result their strength, speed etc will transcend their opponent)

Attack Potency: Small Planet level (Can fight on par with Level 1000 Ruphas. Shattered a small planet into pieces) | Planet level (Easily overwhelmed Level 1000 Ruphas. Capable of turning the whole of Midgard into space dust. Her Silver Arrow can destroy planets) | Low Macroverse level (After becoming the administrator of the universe and assimilating Midgard, she transcended to the point where she could reach the Final Point), up to High Hyperverse level+ (Merely believing that she is stronger allows her to be so. This allows Benetnash to automatically transcend her enemies, always being one step above them due to the nature of her ego. Orm and Benet are capable of transcending in the same way of Ruphas, but due to their ego/will not being as strong, they can only make it so halfway to the "peak" of infinity)

Speed: Relativistic+ (Capable of moving at over Mach 400000) | Relativistic+ (Can move at half-lightspeed. Her speed is almost no different from the speed of light) with Massively FTL combat speed (Dodged Ruphas attack which left the stratosphere and destroyed a distant planet) | Infinite (Gods are infinitely faster than infinite speed, and are able to get even infinitely faster)

Range: Planetary (Can carpet bomb the entire surface of Midgard. A mere step of hers was capable of changing the terrain of the entire planet) | Planetary | Low Macroversal, up to High Hyperversal+

Intelligence: Average normally. Genius in combat (She is a battle genius who managed to reach Level 1000 without needing to eat the forbidden fruit and eventually managed to break past the Goddess' level cap on her own) | Same as before | Nigh-Omniscient 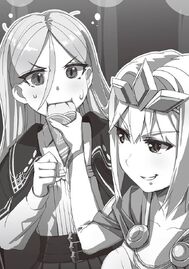 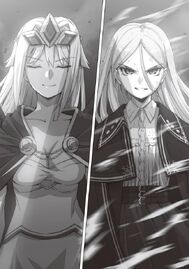 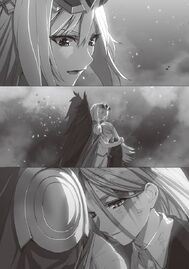