All Fiction Battles Wiki
Register
Don't have an account?
Sign In
Advertisement
in: Redo of Healer, Characters, Female Characters,
and 20 more 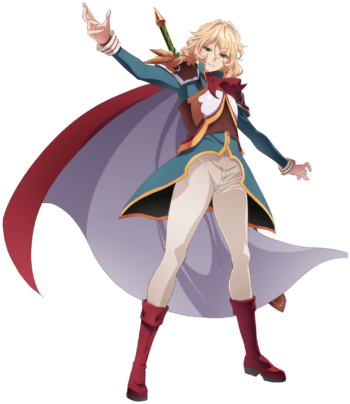 Blade was the Sword Hero, affiliated with Jioral Kingdom.

Tier: 8-B, higher with Ragnarok

Powers and Abilities: Superhuman Physical Characteristics, Regeneration (Mid-Low; she was able to regenerate a small cut on her face), Weapon Mastery (Type 1, she’s skilled with her sword), Enhanced Senses (She could tell Flare by her scent), Precognition (Type 1, she could sense the attack before she knew the person was coming at her), Transformation (She can turn into a more muscled version of herself), Statistics Amplification (When she increases her muscle mass her physical strength increases), Body Control (Ragnarok can increase her muscle mass), Rage Power, Acrobatics, Purification (Type 1, she was able to remove the poison she received from Keyaru's blade).

Speed: Supersonic+ (She could rush the Demon Lord at this speed, she was capable of almost blitzing Keyaru and was even able to pressure him on the defensive)

Lifting Strength: Class 10 (She should be superior to Keyaru), higher with Ragnarok

Durability: City Block level (Should be comparable to her attack potency), higher with Ragnarok

Stamina: High (She was able to fight Keyaru and even use a decent amount of her power)

Ragnarok: Blade possesses a Holy Armament in the form of the sword Ragnarok. When activated, her strength and regeneration are increased exponentially, as well as her overall muscle mass.