All Fiction Battles Wiki
Register
Don't have an account?
Sign In
Advertisement
in: Vivziepopverse, Male Characters, Characters,
and 20 more 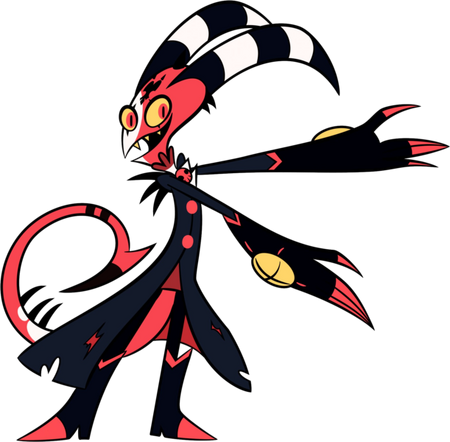 Blitzo is the protagonist of Helluva Boss. He is the founder and manager of Immediate Murder Professionals (I.M.P), a startup assassination business that carries out its services in the living world.

Powers and Abilities: Superhuman Physical Characteristics, Immortality (Types 2, 3, 5. Demons have shown to be extremely resilient, and can't be fully killed unless their soul is destroyed), Regeneration (Mid-Low; Blitz was shot, the blood and wound were gone in a few seconds), Longevity (Hellborn live long life's but still age and can die from natural causes), Weapon Mastery (Type 1. He is a skilled marksman), Martial Arts (Type 1), Dimensional Travel (Via Stolas's Grimoire which give him access to the living world), Portal Creation (Stolas's Grimoire creates a portal), BFR, Dimensional Storage, Possession (When a demon gets killed they leave behind dark energy that's left in their soul to wander into inanimate objects in its surroundings, and possess the object), Natural Weaponry (All demons have claws and teeth that are commonly shown to be able to cut and tear apart other demons), Resistance to Fire Manipulation and Heat Manipulation (He could survive being set on fire and the fire and heat had no affect on him), Disease Manipulation-Unconventional (They can contract diseases and illnesses but will not die from it, it'll only serves to make them more miserable) and Poison Manipulation (Demons were stated to be unaffected by poisons and venoms).

Attack Potency: Multi-City Block level (He should be comparable to Millie)

Speed: Hypersonic+ (He can keep up with Robo Fizz and can react to him)

Lifting Strength: Class 10 (He should be comparable to Millie)

Durability: Multi-City Block level (He should be comparable to Millie)