All Fiction Battles Wiki
Register
Don't have an account?
Sign In
Advertisement
in: Characters, Looney Tunes, Cartoon Characters,
and 79 more 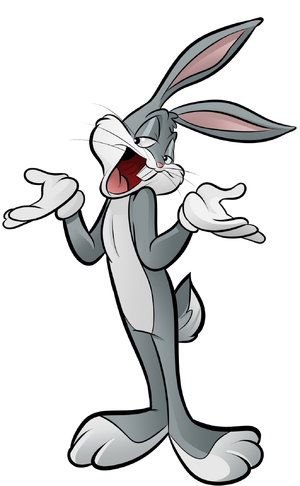 Bugs Bunny is the main portagonist of the Looney Tunes and Merrie Melodies series of animated shorts and is as well one of the most well known characters in cartoons as well in fiction.

He is a anthorphomofic grey cartoon rabbit well known for it's trickster personality and his famous catchphrase he uses almost always most of the time.

Superhuman Physical Characteristics, Genius Intelligence, Toon Force, Reality Warping, Regeneration (Mid-High. Eventually regenerated from being disintegrated, which he wasn't bothered by), Flight, Teleportation, Plot Manipulation (Became the animator in Duck Amuck. If he's about to die or meet a bad end, he can cut the cartoon and escape. Can take control of the script and change the ending of an episode to make things go his way. Can easily exit the cartoon and function outside of it. Can identify and tell who the animator is and grab their utensils), Spatial Manipulation, Time Manipulation, Time Travel, Breaking the Fourth Wall, Stealth Mastery (Expert at sneaking around without his opponents knowing. Can swiftly sneak behind people without making a sound and can even go into people's clothes without them being aware of it), Lightning Manipulation, Body Control (Can produce several arms), Mind Control (Can hypnotize the opponent and can control them by plugging a console into their head. Can snap others out of mind control. His hypnosis can be used to make his victim think they're something else, take full control over them, even influence thephysical capabilities of them and its effects could last at least for hours. Successfully brainwashed Elmer, even after he made him nearly as smart as himself, despite the fact that Elmer was immune to the effects of a famous doctor's and Marvin's hypnosis. That same doctor could hypnotize Yosemite Sam, who can function without his brain. Marvin was able to hypnotize Speedy), Magma Manipulation, Telekinesis (Stopped bullets mid-air), Gravity Manipulation, BFR (Trapped Daffy in a video game. Sent Daffy and Elmer to the inside of a movie. Pulled out a rocket, locked Yosemite Sam to it, and sent him to the outside of the galaxy), Data Manipulation (As seen here), Immortality (Types 1, 2, 3, 5 and 8. Will exist and not age as long as people still remember him and laugh at his cartoons; can regenerate from his injuries within a short timeframe. The Grim Rabbit doesn't want Bugs' soul anymore. Has erased his name off the Grim Rabbit's list. Implied to have given the devil some trouble before), Duplication (As seen here), Text Manipulation (Both inside and outside of fiction), Weapon Mastery (Very skilled in fencing, using guns and swordsmanship. He can shoot with incredible accuracy and perform elaborate trick shots involving the bullet ricocheting off multiple surfaces), Dream Manipulation, Dimensional Storage, Martial Arts (Has some experience with boxing and wrestling. Easily beats up Yosemite Sam and two thugs Beats another thug Batman-style. Has combat training from the U.S. Army and Marines), Resurrection, Elasticity (Can stretch his limbs), Non-Physical Interaction (Can hit intangible beings. Can eat ghost carrots, can walk on clouds, hit them and move smoke as if it were a curtain. Can suck up noises with a vacuum cleaner), Can put out hellfire from Devil Daffy, Magic (As shown here), Transmutation (Turned bullets into flowers. Turned Daffy into a flower in "Duck Amuck". Turned playing cards back to normal after dicing and mixing them into juice, turned his carrot into a credit card), Sand Manipulation (with Acme Quicksand), Shapeshifting (As shown here), Immersion (Can enter mirror reflections, newspapers, TV channels and paintings. Can bring characters and objects from fictional works), Causality Manipulation (Granted and undid a wish that altered history) and Acausality (Type 1; Was unaffected by that wish and like Wile.E Coyote, should be unaffected from having a previous page of his own story altered), Preparation (As shown here), Cloth Manipulation (Can instantly wear his disguise by spinning around), Telepathy, Illusion Creation with the Mirror, Empathic Manipulation (As shown here), Biological Manipulation (Can use magic to change other people's hair and nail model. Can turn into a vampire version of himself. Has changed the structure of people's jaw and teeth), Life Manipulation, Plant Manipulation (with Magic Hat), Invisibility (with invisibility potion), Supernatural Luck (As seen here. So lucky he causes misfortune to others, even to those who are lucky themselves like the Grim Rabbit), Void Manipulation (Can erase living beings with a giant pencil), Enhanced Senses (Enhanced senses of hearing and vision. Got enhanced smelling after an experiment. Can sense when gold is near via short body spasms. Has another sense that warns him when his being watched. Fought ninjas underground. Once dodged a gunshot from Elmer despite having his back turned), Creation (with art supplies and magic), Technology Manipulation (here), Sleep Manipulation (Can use hypnosis to put others to sleepand put himself with pills at 3:02), Sound Manipulation (Can shout high enough to break ice. His singing can break a mirror and cause all the leaves of a nearby tree to fall), Attack Reflection (As shown here), Age Manipulation, Size Manipulation (As shown here), Transformation (with Hyde juice).

Mind Manipulation (Quickly wore off Elmer's mind control), Void Manipulation and Existence Erasure (Can survive in a void which erased all of the cartoon Bugs was in and after that he was completely fine), Transmutation (Wore off the effects of the Magic Powder, can turn back into normal after being turned into Michigan J. Frog), Death Manipulation (Has touched the Grim Rabbit and his carrot-scythe without any problem, despite the fact that he killed flowers just by walking near them and his mere presence caused groceries to decay), Empathic Manipulation (Wasn't attractedto Sam, after he atethe witch wafer,which makes the onewho eats it irresistible temporarily.Is looney enough to be immune to angst), Poison (Quickly reformed after being exposed to chemical warfare, was fine after being bitten 7 times by a venomous rattlesnake), Fate Manipulation (Was unnafected by a wish he made into himself), Madness Manipulation (Shrugged off the effects of a chemical that make other people go crazy), Time Stop (He could still move and talk when the animation completely stopped), Extreme Heat & Radiation (Went close enough to the Sun to give it a phone. Isn't bothered by boiling water as he treats it like a relaxing hot tub),Gravity, Sleep, Darkness, and Fire Manipulation, Soul Manipulation (Despite taking souls almost all of the time, the Grim Rabbit didn't wanted Bugs's soul anymore after multiple attempts)

Attack Potency: At least Multi-Solar System level (Has injured and beaten down Yosemite Sam several times, whose fight with Marvin the Martian resulted in the creation of a alternative dimension they found themselves into which then collapsed into a interstellar sized explosion which was powerful enough to make a visible night sky containing two constellations and many other stars and Willy E. Coyote who turned himself into a enormous constellation and launched multiple stars at immensly fast speeds as casual attacks and, while running, he was able to make many stars to appear and then dissapear and also had pulled out a rocket that exploded and created a constellation, which then after made all of the stars of that constellation to fall. Has damaged Daffy Duck who survived the creation of a black hole)

Speed: Massively FTL+ (Should be superior to his own rocket he made which quickly flied past the Milky Way [ 3506461055556.8633c]. is able to casually dodge and reflect Marvin's laser beams which can reach from Earth to Mars in a instant. is able to keep up with Yosemite Sam's attack which can reach and one shot Mars in a second and also Marvin himself who can dodge them. is capable of piloting spaceships and rockets which are capable of flying past many interstellar distances. outran a Laser at these speeds)

Lifting Strength: Stellar (Scaling to Marvin, who phsyically pulled out a Star and Sam who moved a Black Hole)

Durability: At least Multi-Solar System level (Was unnafected by a explosion which destroyed a entire half of the Moon. Is able to tank Yosemite's attacks and Marvin's lasers which are able to destroy entire planets and stars)

Stamina: Very high (Rarely gets exhausted. Built an entire city in a matter of seconds without breaking a sweat. Stayed up all night with his eyes forced open in the New Looney Tunes episode "Bugs Bunny?" and wasn't tired afterwards. Gets chased for prolonged periods of time by the likes of Elmer Fudd, Yosemite Sam and Marvin the Martian on a daily basis, and is never shown to tire)

Range: Standard melee range. Unknown with abilities, can travel across planes of existence

Standard Equipment: A carrot and a lot more with hammerspace

Intelligence: Extraordinary Genius. Invented a time machine in seconds, a carrot powered car, the carrot peeler, his own robots ,some of which are bulletproofand he can hack them if stolen and reprogrammed Marvin's robots. Very good at using his surroundings and tricking, has tricked Elmer since they were babies. Has outsmarted the government, secret agents, scientists, Nazis, army soldiers, gangsters, ninjas and the Grim Rabbit. Seems to be a good fighter and very acrobatic. He's a skilled marksman and a master swordsman. Possibly has minor knowledge on The Force. Has taken multiple professions over the years like a teacher, a director, a detective, an actor, a musician, a ruler, a scientist, a superhero, a high ranking member of the army, an astronaut, etc. One time he managed to arrest a master of disguise, who could instantly change his appearance and even take the form of animals smaller than himself. He is an amazing actor, master of disguise, escape artist and multilingual, can speak German, Russian, Hawaiian and French. He can read Egyptian hieroglyphics and flag symbols. Knows basic magictricks and optical illusions. Always keeps calm even when facing extreme danger and is good at provoking and manipulating his opponents. He can imitate any animal noise to trick people