All Fiction Battles Wiki
Register
Don't have an account?
Sign In
Advertisement
in: Characters, Gods, Deities,
and 35 more 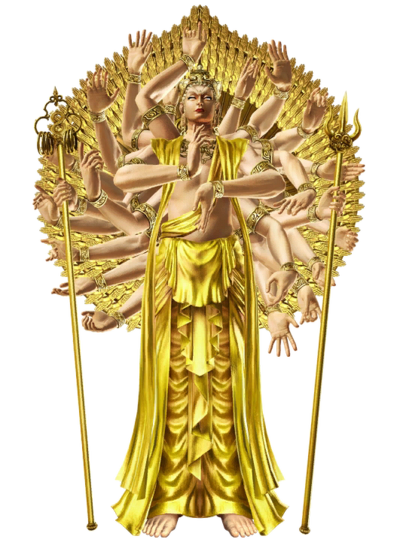 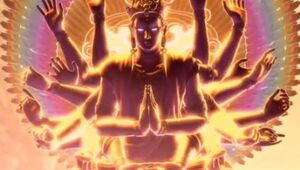 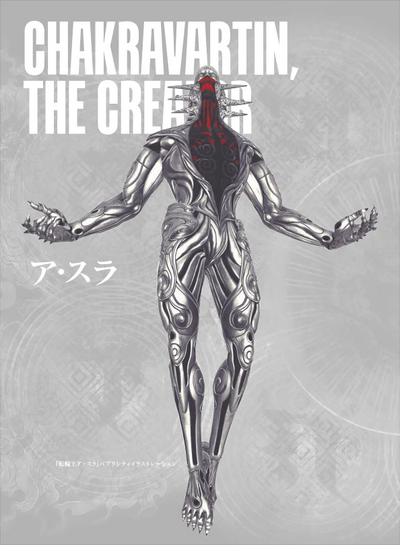 Chakravartin, also known as the Golden Spider is a mysterious deity entity who created the universe and holds controll of it, he then accompanied Asura to him to become the new ruler of the world. He's also the main antagonist in Asura's Wrath.

Age: Existed before the universe

Classification: God of Mantra (alternatively known as the "Spinner of Mantra"), Embodiment of the Wheel of Life, Ruler of Naraka

Powers and Abilities: Superhuman Physical Characteristics, Genius Intelligence, Expert in Martial Arts, Immortality (Types 1 and 5. Chakravartin possessed immortality and was unable to age. He also couldn't be killed by conventional means, and could only be destroyed by Asura), Energy Manipulation (Mainly attacks using energy in the form of blast attacks. This further extends to creating constructs made of energy), Reality Warping (Has displayed the power to change whatever area he's present in, such as what he did with Space and his Pocket Reality), Time Stop (In his battle with Asura, he stopped time on many occainsions), Creation, Flight, Telekinesis (Can throw numerous stars and planets, including a giant planet and a red sun, as projectiles), Elasticity, Illusion Creation (Can create false versions of himself, which tricks the opponet), Large Size (Type 7; Is the size of The Milky Way), Existence Erasure (Attempted to remove Asura from existence. Is shown erasing the his pocket reality and reducing it to a white void), Pocket Reality Manipulation (Maintains his own pocket dimension outside of The Universe), Size Manipulation (Can increase his size to dwarf that of entire galaxies), Soul Manipulation (Created Mantra, a source of power derives from the souls of the living), Barrier Creation (Able to create barriers that protect him from incoming attacks), Abstract Existence (Type 3. Stated to be the embodiment of The Wheel of Life), Void Manipulation (Created spears made out of nonexistence), Life & Death Manipulation (Embodies the cycle of Life and Death, as such, should possess control over it's endless cycle), Spatial Manipulation (Created an endless realm), Possession (Chakravartin has demonstrated the ability to possess the bodies of individuals, referring to them as "vessels", as seen when he took possession Mithra's body), Resistance to Extreme Cold and Cosmic Radiations (Can effortlessly survive in space, which is cold and filled with radiations.)

Attack Potency: Low Multiverse level (Holds all of existence on his will, which includes the main universe, the wall of naraka and alongisde many other worlds. Repeatedly stated to have the capability of creating, destroying and resetting the entire universe which he can do casually. Can shatter entire parallel dimensions)

Speed: Massively FTL+ (Kept up with Destructor Form Asura, which flied from Gaea to the center of the milky way in seconds. his attacks are this fast)

Lifting Strength: Galactic (is as big as the milky way)

Stamina: Very high (Capable of taking several brutal beatings from Asura, only tiring at the final stretch of their fight)

Range: Extended melee range (several meters) in melee by virtue of sheer size, likely much higher with telekinesis and reality warping (Created Gaea, and should have similar telekinetic capabilities as his Golden form) | Thousands of lightyears (Warped and pulled the entirety of the Milky Way Galaxy towards him) | Standard melee range physically, likely similar to base with telekinesis and reality warping

Intelligence: Genius (Very wise, orchestrated the events of Asura’s Wrath, from planting the Gohma in Gaea to setting off the war between them and the Demigods, to find an heir. Tricked Asura as being a sort of friendly, albeit annoying, creature whenever Asura is in Naraka)