All Fiction Battles Wiki
Register
Don't have an account?
Sign In
Advertisement
in: Weapons, Gems, Sonic the Hedgehog,
and 23 more 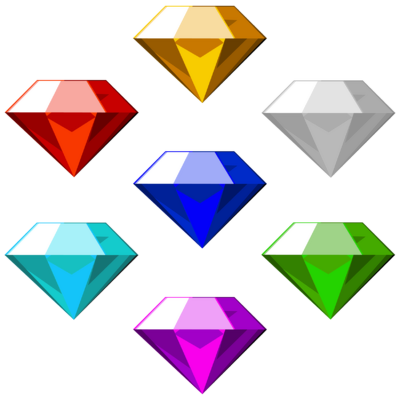 The Chaos Emeralds are mystic and the most powerful artifacts of the Sonic Franchise, which grants the user power that is considered to be "unlimited" and they are mainly sought by Dr. Eggman.

Powers and Abilities: Energy Manipulation, Energy Projection, Statistics Amplification, Reality Warping, Teleportation, can Send other beings to other dimensions on a 2-B scale, Time Manipulation (Users of the Chaos Emeralds can manipulate time for a short period of time), Flight, Weather Manipulation, Can grant the user power to give him a Super Form, Dimensional Travel, Resurrection, Mind Manipulation, Spatial Manipulation

Attack Potency: Varies from At least Large Planet level (A single Chaos Emerald is able to perform this much energy) to Small Star level (Awakened Dark Gaia, and while not being used at their full power, they are capable of allowing the Eclipse Cannon to pierce through stars) | Varies from Multi-Solar System level (Are consistenly sought by Eggman for their "unimaginable power", thus, they should be far superior to the likes of the Final Egg Blaster) to At least Universe level+ to Low Multiverse level (They enhanced Sonic's capabilities in a powered up super form to fight against the Egg Salamander, their power in conjuction with the Sol Emeralds would cause the worlds of Sonic and Blaze to collapse, allowed Modern Super Sonic alongside his Classic counterpart to easily defeat the Time Eater) to Multiverse level (At maximum power, the Chaos Emeralds were able to enhance Sonic's powers to alongside Shadow and Silver defeat Solaris)

Speed: Subsonic normally (They are at this speed normally), busts the user to Massively FTL+ to Immeasurable speeds

Range: Planetary, Multiversal via BFR | Users are granted to have Interstellar to Universal+ to Low Multiversal to Multiversal range

Weaknesses: The Master Emerald is capable of nullyfing their powers. the negative energy downgrade their immense power