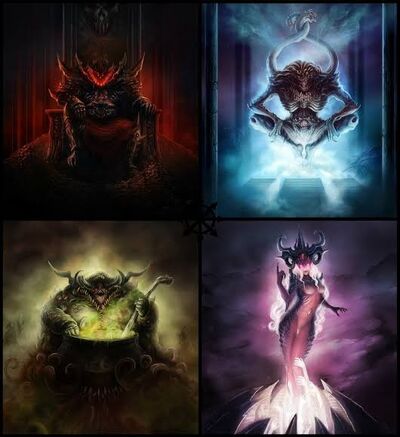 Chaos Manipulation is the ability to manipulate chaos. That is, the power to cause disharmony, confusion, disorder, change entropy and destructiveness in a way to works by not exactly “destroying” constructs but unmaking constructs, concepts, laws etc. Generally reality is on state of constant stasis and order, that keep it stabilized, essentially Chaos Manipulation is reverting this state, to unmake it, and make it crumble into Chaos. Manipulating Chaos would be disorganizing a system, that may varie in complexity and tier, this “systems” may be anything depending on the context of the verse, for example disorganizing the basic structure of a character to make it cease to exist, but fundamentally it represents a pure destructive, chaotic, primordial form of everything or it can also be a hodgepodge of everything.

Chaos Manipulation is primarily used in the form of destruction or “unmaking”, of systems that are stable (Standard state of reality) such as space, time, or even reality itself. Such a being can be the embodiment of chaos, whereas their simple appearance causes everything to become chaotic, such as automatically triggering natural disasters, destruction, or disharmony, confusion, and strife among people, Chaos Manipulation may also be associated with the Inducement of Madness, Corruption and maybe even Nothingness and Darknesses Manipulation.