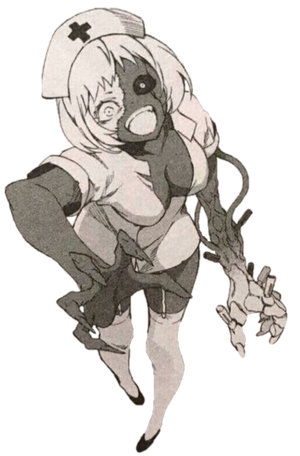 Chikura was the former eighth Basara. Chikura terrorized Tsuchimikado Island for a hundred years and turned several humans into zombies. She was eventually taken down by a team of 50 people, led by Arima Tsuchimikado, Narumi Ioroi, Arata Inanaki and Seigen Amawaka.

Powers and Abilities: Superhuman Physical Characteristics, Immortality (Types 1, 2, 3. Kegare don't physically age, they can survive losing multiple limbs and still live, they will keep regenerating unless killed), Regeneration (Low-Mid; Most Basara that she is comparable to have this level of regeneration), Absorption (Kegare can absorb spiritual power as they fight), Abstract Existence (Type 2. Kegare are born of negative thoughts or emotions), Non-Physical Interaction (She is capable of harming other Basara and Kegare), Non-Corporeal (Stated that ordinary weapons have no effect due to Kegare being born of the evil aura of Magano), Enhanced Senses, Extrasensory Perception (She can sense the spiritual power of an opponent), Necromancy (Type 1. She can reanimate, corrupt and control corpses), Biological Manipulation (She can merge corpses together to make a large kegare), Transformation (With Jugon Monoimi), Statistics Amplification (With impure enchanted gear it acts the same as exorcist enchantments), Energy Manipulation (She can make spiritual energy attacks), Curse Manipulation (All attacks from Kegare are curse based and upon her death while in Jugon Monoimi, it will put a curse on the land that lasts for at least hundreds of years), Resistance to Curse Manipulation (Kegare are able survive in Magano which infects living being with a curse that kills them) and Disease Manipulation (Stated that Kegare and Basara are unable to catch illnesses).

Speed: Transonic (Should be superior to Benio with Cold White Fangs), High Hypersonic in Jugon Monoimi (She's superior to Sakura)

Lifting Strength: Class 10 (She should be comparable to Gabura)