All Fiction Battles Wiki
Register
Don't have an account?
Sign In
Advertisement
in: Characters, The Elder Scrolls, Book Characters,
and 76 more 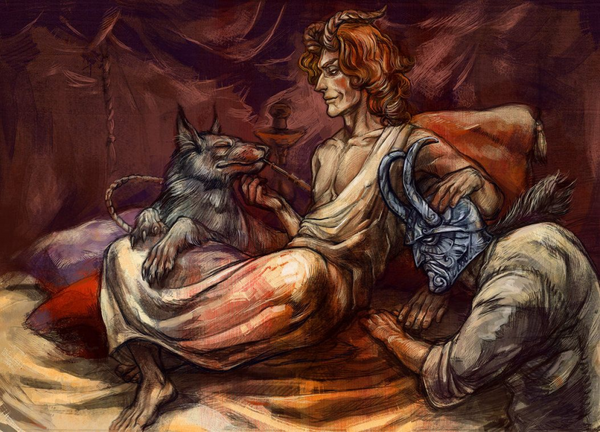 Clavicus Vile, also known as the Prince of Trickery and Bargains, the Master of Insidious Wishes, Child-god of the Morningstar, and Nycot to some Second Era cultists who lacked the ability to read Daedric script, is a Daedric Prince whose sphere is the granting of power and wishes through ritual invocations and pacts. He is seen as one of the more "sophisticated" of the Daedric Princes, and often appears in the guise of a jovial Skaafin, a race of horned Daedra that inhabit the Fields of Regret, his realm in Oblivion

Clavicus finds eternity to be "boring", so he finds entertainment in watching mortals and occasionally meddling in their affairs. He has been known to be the patron to vampires, gracing them with social stature, reason and savvy, allowing them to not only live among regular mortals, but to hold powerful positions in society. However, not all of Vile's machinations are necessarily insidious; he has been known to reward those who, on his direction, eliminate threats to the general public (while still serving his own interests)

Vile is rarely seen without his loyal companion, Barbas. Barbas typically assumes the form of a dog, but is also known to appear as a Scamp named Creeper. The two are so close, Barbas is almost universally depicted alongside his master in artwork and statuary. In fact, Vile has been known to store up to half his power within Barbas. These facts have led to speculation that the pair are, in fact, two halves of the same being

Clavicus Vile is an enemy of Ebonarm. Clavicus Vile's summoning day coincides with the New Life Festival, the 1st of Morning Star

Gender: Inapplicable, Appears as a Male

Attack Potency: High Hyperverse level (Clavicus Vile is a Daedric Prince which maintains and comprises Oblivion, and is one of the Ruling Princes and holds a great piece of oblivion in which he holds absolute control of and is one of the Creators of Oblivion) | Ascendent level (In his Original State Before creating, he was an Et'Ada who were Boundless, Eternal and Infinite Spirits who existed wholly independently of duality, predating the concepts of Time and Space, and living in pure harmony, having practically no personalities or boundaries that separated themselves from anything else, inhabiting creation in its original Zero-State of pure Infinite possibility, where everything that can and cannot happen is always happening all at once, forever, regardless of contradictions)

Weaknesses: If he where to use Umbra he would risk being depowered and even killed as the sword has a will of its own and does not like Clavicus Vile