All Fiction Battles Wiki
Register
Don't have an account?
Sign In
Advertisement
in: Crazy Frog, Characters, Musicians,
and 11 more 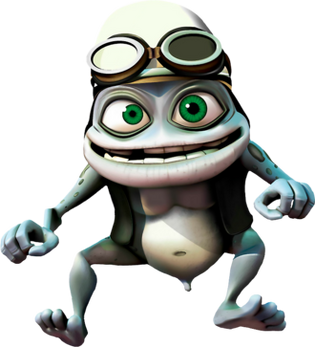 Crazy Frog, originally known as The Annoying Thing, is a Swedish CGI-animated character and musician created in 2003 by actor and playwright Erik Wernquist. Marketed by the ringtone provider Jamba!, he was originally created to accompany a sound effect produced by Daniel Malmedahl in 1997 while attempting to imitate the sound of a two-stroke engine.

The Crazy Frog spawned a worldwide hit single with a remix of "Axel F" (from the soundtrack of Beverly Hills Cop), which reached the number one spot in Turkey, New Zealand, Australia and most of Europe.

Name: Crazy Frog, "The Most Annoying Thing in the World

Powers and Abilities: Superhuman Physical Characteristics, Electricity Manipulation and Resistance to it (Showed here), Levitation (Able to levitate making a position as he was in a invisible car), Telekinesis (Pushed a car only by flying on its side), Hacking, Self-Sustenance (Type 1. Can breath underwater), Limited Light Manipulation (Can shpe his own reflect in a mirror), Body Control.

Attack Potency: Small Building level (Should be comparable to his own durability as he can hurt himself).

Durability: Small Building level (Could survive after being hitted by several lightings from a cloud. Was totally fine after being shooted by the canon of a tank. Survived the explosion of a car and a missile).

Stamina: High (Can tireless run from several robots for hours).

Intelligence: High (He is a hacking master, being able to hack the system of countless robots at once. He is able to effectively escape from soldier robots, so much so that he has a reward of 50,000 for his head)