All Fiction Battles Wiki
Register
Don't have an account?
Sign In
Advertisement
in: Characters, Male Characters, Antagonists,
and 18 more 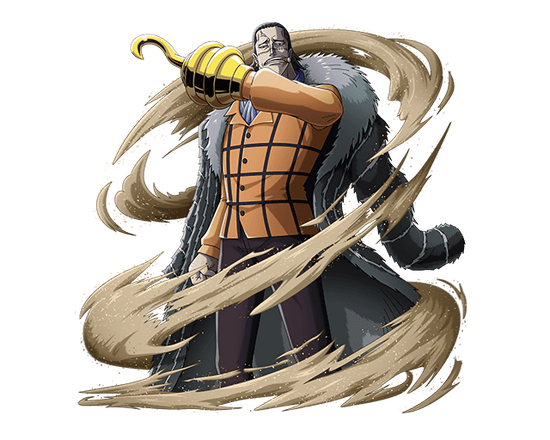 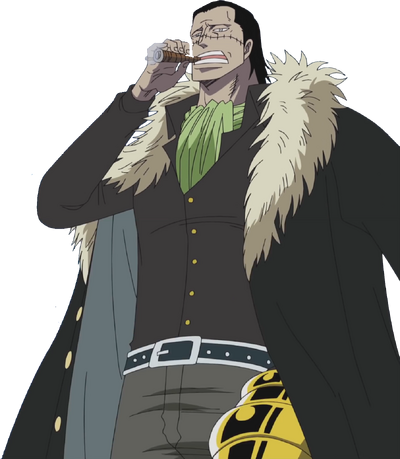 He is one of the longest running primary adversaries of the series as well as the first enemy to hand Luffy a complete and utter defeat, not once but twice.

Powers and Abilities: Superhuman Physical Characteristics, Weapon Mastery (Type 0), Martial Arts (Type 2), Regeneration (Low-High in logia mode), Inorganic Physiology (Type 1 in logia mode), Intangibility (As a Logia Devil Fruit user, his Suna Suna no Mi makes him intangible to most conventional attacks, due to being a sand-man), Flight (Shown here), Sand Manipulation (Due to having ate the Sand Fruit, he can freely control sand), Absorption (Can suck up moistures from people, leaving their bodies in a state they cannot move from. Can grab someone with his right hand and desiccate it. Whilst gripping Luffy, he forcibly turned him into a desiccated near-corpse), Transmutation (Can turn the ground, rocks, statues, grass, clothes, etc., back into dust), Weapon Creation (Can create solid blades out of sand), Weather Manipulation (Can alter the weather by creating massive sandstorms), Poison Manipulation & Corrosion Inducement (His hook posseses a poison which can melt away even rocks), Resistance to Sand Manipulation, Heat Manipulation (Could endure being dipped into boiling water while processed for Impel Down)

Attack Potency: Small City level+ (Performed a sandstorm this strong. Can compress said sandstorms and use it to attack. Easily impaled Luffy) | At least City level, likely far higher (Comparable to Gear 2nd Luffy during marineford. Could contend with high tiers such as Doflamingo, and Admiral Akainu off panel for extended periods. Tanked an attack from Jozu)

Standard Equipment: His hook, which can be opened to reveal it is covered in deadly poison, there is a knife underneath the hook if it breaks off

Intelligence: Gifted (Was able to deduce that the Strawhat Pirates put on arm bands solely to counter Mr. 2's Copy-Copy Fruit and infiltration potential. Sir Crocodile first and foremost made himself enamored with the populace by setting up pirate attacks that he would wipe out before the King and his forces could, undermining trust in their ability and making people trust Crocodile inherently. Framed King Cobra of Alabasta as having used the forbidden substance Dance Powder to artificially give the capital rain whilst stealing the rain of other nearby cities, causing the city of Yuba's youth to start holding rebellious thoughts. Masterminded Baroque Works while keeping the World Government completely in the dark about what he was doing and making himself a hero in the eyes of the people)

Weaknesses: Can't turn intangible while in contact with liquids. He can only use his power to full extent in desert wastelands

Suna Suna no Mi (Sand-Sand Fruit): A Logia-type Devil Fruit, eaten by Crocodile, allowing him to become, generate and manipulate sand. It also allows the user to control quicksand, sandstorms and the absorption of liquids. This fruit allows Crocodile to sense anything that is moving through sand (he uses his power to sense underground rivers). Crocodile has shown to create sand blades that can slice through the ground, create sandstorms, quick sands, and cause dehydration by physical contact. In addition, Crocodile has shown to transform his arm into sand in order to extend his reach for his hook, as a long range capture and strike. He can also suck all the moisture out of any object, living or non-living, by placing his right hand on them. This ability allows him to utterly destroy his surroundings and killing all organic lifeforms via dehydration.