All Fiction Battles Wiki
Register
Don't have an account?
Sign In
Advertisement
in: Characters, Cartoon Characters, Ducks,
and 51 more 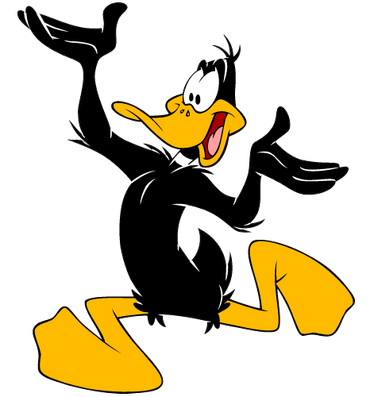 Daffy Duck (also known as other names such as Sheldon) is the deuteuragonist of the Looney Tunes cartoon series by Warner Bors. he's usually a rival to Bugs Bunny on most of his appeareances, but he can also be friends with him.

Attack Potency: Multi-Solar System level (is a constant rival to Bugs Bunny and is capable of fighting Bugs and also many other characters such as Willy E. Coyote and Marvin the Martian)

Lifting Strength: at least Stellar (comparable to Marvin who pulled a star and Yosemite who pulled a black hole with his rope)

Durability: Multi-Solar System level (took a beating from Bugs and was with no damage afterwards)

Intelligence: Varies on appereances as sometimes he can be dumb while in others he can be very skilled in making plans and making the opponents fight against each other

Weaknesses: sometimes he is very overconfident and icompetent and massively greedy, but this can work in his advantage.