All Fiction Battles Wiki
Register
Don't have an account?
Sign In
Advertisement
in: Demon Slayer, Characters, Female Characters,
and 27 more 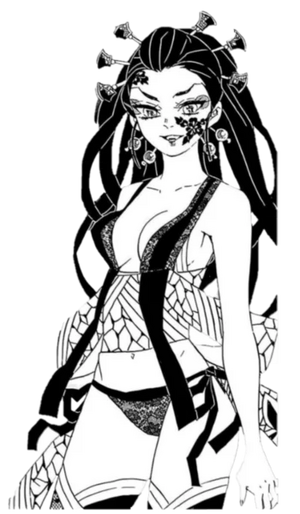 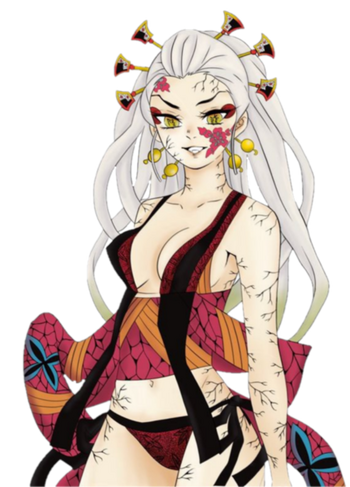 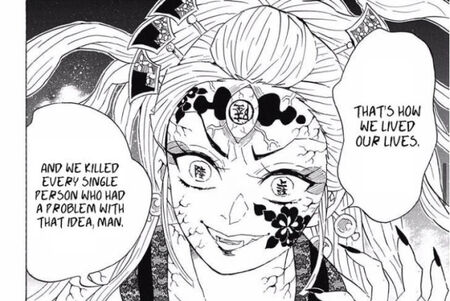 Daki is a member of the Twelve Kizuki, being the secondary holder of the position of Upper Rank 6, a position she shares with the primary holder, her older brother, Gyutaro.

Powers and Abilities: Superhuman Physical Characteristics, Immortality (Types 1, 2, 3, and 8. Daki cannot be killed unless her brother Gyutaro is also killed simultaneously), Regeneration (High-Mid; even after being reduced to a decapitated head, a low-level demon would have still been capable of regenerating if his head were to be "completely crushed"), Self-Sustenance (Type 3, demons don't tire), Body Control (Daki can turn parts of her body into her obi), Acrobatics, Dimensional Storage (She can store people inside her obi), Natural Weaponry, Transformation (Can transform into a demon and a human), Shapeshifting (Daki can turn her body into a obi), Elasticity (Her body can stretch with her obi), BFR and Sleep Manipulation (When a target is put inside her obi they're put to sleep and can't fight or move), Statistics Amplification (When she brought her obi back to herself it increased her power), Enhanced Senses (Demons have enhanced senses), Extrasensory Perception, Forcefield Creation (She can create a barrier out of her obi), Hair Manipulation (While decapitated she was trying to grab and attack Inosuke with her hair), Martial Arts (Type 1, she has shown to have skill in hand to hand), Resistance to Disease Manipulation (Demons can't catch illnesses).

Lifting Strength: Class 25 (Should be comparable to Tanjiro who performed this feat)

Weaknesses: Sunlight, Wisteria Flower, Being Burnt (She was killed by being set on fire and will freeze up from the trauma of remembering it), Childish

Blood Demon Arts: are spells or techniques that higher-level Demons can cast or are the supernatural abilities possessed by each of them.