All Fiction Battles Wiki
Register
Don't have an account?
Sign In
Advertisement
in: Characters, Female Characters, Monsters,
and 72 more 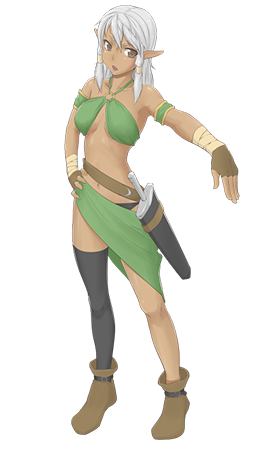 Dark Elf Fencers are a kind of elves that fell into darkness and was banished to the forest near Iliasville. Much like many like her, she was accepted in Enrika, where she now serves as a guard against intruders alongside her fellow dark elves.

In the Paradox timeline, she is known as Lona and serves a similar role. She can potentially join Luka and his party after being defeated, helping them in saving the world.

Intelligence: Above average (Considered a fairly skilled fighter, albeit her fall into darkness affected this somewhat) | Above average | At least Above average (Additionally, trained in nearly all of form of combat while reaching the highest form of mastery)