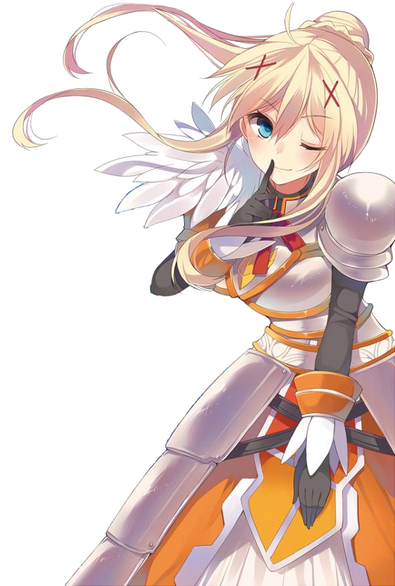 Dustiness Ford Lalatina , usually known as Darkness is one of the three main female protagonists of the KonoSuba series. She is a crusader with masochistic tendencies.

Darkness meets Kazuma after reading his notice looking for party members. Though he initially rebukes her, she eventually joins the party and becomes close friends with Kazuma, Aqua, and Megumin, and they go on many adventures together. To help Kazuma get a stay of trial, she agrees to meet with Alderp's son Walter. Due to or perhaps in spite of Kazuma's interference, Walter turns down the proposal.

Powers and Abilities: Superhuman Physical Characteristics, Power Mimicry, Partial Soul Absorption (Killing or eating something in Konosuba allows you to absorb a portion of their soul as XP), Willpower Enhancement, limited Mind Manipulation (She can forcefully make her opponents target her), Resistance to Magic (Has one of the highest magic resistance out of the cast), Possession (She's capable of resiste Vanir's possession), Absorption (She can resist even having her HP getting absorbed), Poison Manipulation (Stated to have poison resistance, also tanked Hans' poisonous body parts), BFR (Able to resist teleportation magic), Holy Manipulation (Holy effects won't work on her), Status Effect Inducement (Shown multiple times to be resistant of status effects and specialize in this), Fear Manipulation, Paralysis Inducement, Sleep Manipulation (Resisted Yuiyui's attempt to paralyze and put her to sleep), Acid Manipulation (Resisted Hydra's acid), Curse Manipulation, Death Manipulation (She was able to survive Vanir's instant death attack, although it knocked her out), Pain Tolerance, Disease Manipulation (Possess a strong immune system)

Attack Potency: Small Building level (Can harm high an arsenal of monsters as well as demon king generals such as Beldia, devils and similars)

Durability: Small Building level (As a paladin she has an incredible defense, capable of withstanding the attack of an arsenal of monsters and also of the generals of the demon king. similar opponents without being able to hit them) Multi-City Block level against magical attacks (Tanked Megumin's Explosion, although it left her in a near-death state)

Weaknesses: Due to her masochistic nature, she loves to take every hit, and cannot land a single hit.