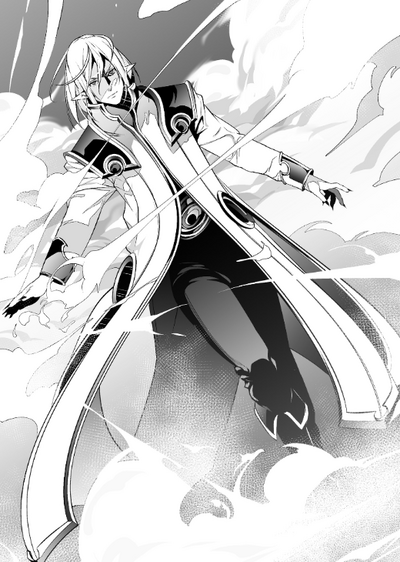 Demon Lord Deus or Deus is the main antagonist of the series. He makes his full appearance only in the seven chapter of the light novel. Deus is a Demon Lord who wants to erase the humanity, because according with his own words, humans are weak, and that's why he wants to kill them. The other reason for this lies on the fact that the same person was a human in the past. By the words of the Demon Lord, he was a Japanese who died in an accident and then one day he met with a Goddess who allowed him to reincarnate in another world as a second chance, so he chooses to become a Demon Lord, a being stronger than anyone, obviously, this was a fact until Wataru appeared in the same world.

Totally unrelated with his background however this is a interesting curiosity, but his name means “God” when translated from Portuguese and Latin to English.

Origin: Wataru!!! The Hot-Blooded Teen and His Epic Adventures in a Fantasy World After Stopping a Truck with His Bare Hands!!

Powers and Abilities: Superhuman Physical Characteristics, Illusion Creation (Can create illusions of himself to trick enemies), Teleportation (Can use teleport to dodge attacks), Aura and Statistics Amplification (Can release a dark aura around him when he uses the Holy Fists of the Demon Lord, and this same technique can amplify his already monstrously powerful physical attacks), Magic (Can use magic), Martial Arts (Could fight against Wataru, who knows many types of martial arts, and he can Fighting Mantis stance to accelerate his internal generation of magic), Social Influencing (He is the King of All Monsters, and he is also the King of the Four Masters. This power was also shown when he fought against Wataru, his minions was crying "Deus! Deus! Deus!" as a way to show they support for their Lord)

Attack Potency: Small Building level (Was capable of trading blows and holding a fight against Wataru, and one of his attack when imbued by the Holy Fists of the Demon Lord was able to create a giant crater in the ground)

Speed: Supersonic combat, reaction and movement speed (Just like Wataru, he can land blows at supersonic speeds, one of his attack was a fatal chop that reached 1200 km/h. Should be totally comparable to Wataru, too)

Durability: Small Building level (Could withstand with most of Wataru's attack)

Stamina: Average, virtually can accelerate his internal generation of magic to get more stamina

Weaknesses: The weakness displayed by him was his arrogance that led to his defeat, and the other is that he is diabetic, yes, he have diabetes, and thanks to this, his stamina is low.