All Fiction Battles Wiki
Register
Don't have an account?
Sign In
Advertisement
in: Chainsaw Man, Male Characters, Characters,
and 27 more 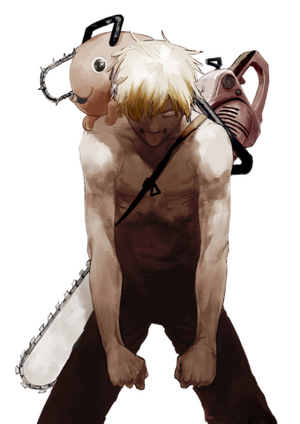 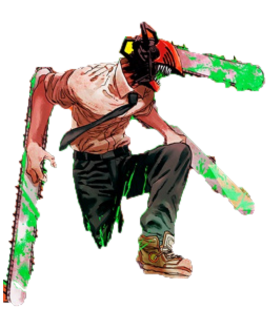 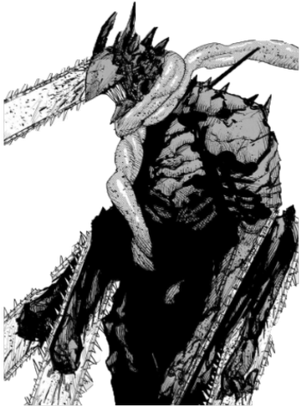 Denji is the main protagonist of Chainsaw Man. As a young boy, he inherits his father's debts from the Yakuza. After meeting Pochita, he becomes a Devil Hunter for the Yakuza in an attempt to clear his debt. Once the Yakuza, under the control of a Devil, betray him, he dies and Pochita becomes his heart. He now becomes the Chainsaw Devil by pulling a cord on his chest. After meeting Makima, he became a Public Safety Devil Hunter.

Superhuman Physical Characteristics, Immortality (Types 2, 3, 4 and 8. Devils do not truly die, they will resurrect in Hell or on Earth depending on where they are killed and as long as the concept they embody is feared) Regeneration (Mid-Low, possibly Low-Mid, dependent on the amount of blood he has absorbed, his arm reattached itself after he received a transfusion, healed his broken arm, other Devils were able to regenerate amputated limbs), Abstract Existence (Type 2. Devils are born with a name and are kept alive/empowered by the fear of the object they embody), Transformation (Can transform into a Chainsaw Devil by pulling the cord on his chest), Blood Absorption (Devil can heal or regain strength from drink blood), Martial Arts (Type 1. He has displayed a skill in hand to hand against skilled opponents), Weapon Mastery (Types 0 and 1. He is skilled with both his chainsaws, hammer and chains), Weapon Creation (Can grow and retract chainsaw blades out of his arms and head), Empowerment (Devils are empowered by fear. Each Devil is born with a name; the more feared that name or the concept of the Devil, the more powerful the Devil becomes), Chain Manipulation (Denji can use the chains of his chainsaws to grab and wrap around a target), Pain Tolerance (Type 3. Denji and have most or all his limb destroyed with little reaction to it), Enhanced Senses (Devils have an enhanced sense of smell).

All previous abilities, Regeneration (High-Mid, Denji was able to regenerate just from his heart), Conceptual Manipulation (Type 4. When Chainsaw Man consumes a Devil, its concept and the object it represents are erased from existence and forgot by everyone), Duplication (Denji can make a clone of himself if he removes his heart and allows a body to regenerate from it), Possession (Devils as a last resort will possess a corpse to survive death, but it weakens them and they become fiend).

Stamina: High (Can be almost completely torn apart and continue to fight)