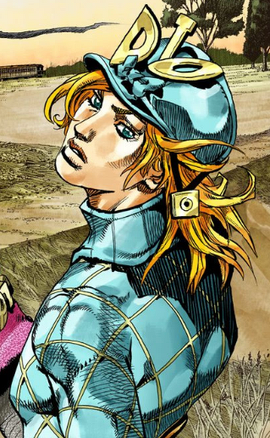 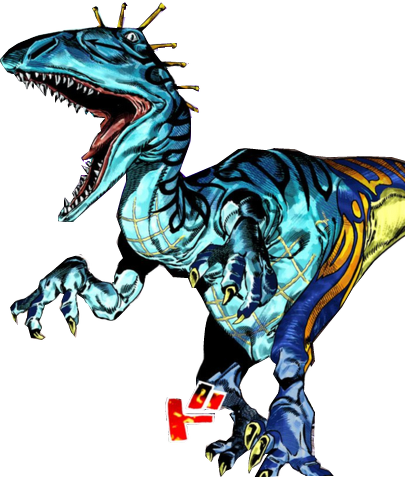 Diego Brando, commonly referred to as Dio, is a major character in JoJo's Bizarre Adventure Part VII: Steel Ball Run. A popular British jockey known for his worldwide fame and success, he joins the Steel Ball Run race to win the grand prize of fifty-million dollars. During the race, he becomes involved in the search for the parts of the Holy Corpse, and temporarily allies with Funny Valentine before becoming a traitor. He is considered to be the rival of Johnny Joestar.

Powers and Abilities: Superhuman Physical Characteristics, Genius Intelligence, Extrasensory Perception (Capable of seeing ghosts and souls among some other supernatural forces that are normally otherwise invisible), Aura, Enhanced Senses, Acrobatics, Scary Monsters allows Diego to transform into a dinosaur and turn other things into dinosaurs of varying functionality (Turned a guard into a part of a tree. Turned 2 guards into dinosaur-themed lamps), Body Control, Can command his dinosaurs (They always obey a command of him), Stand Physiology (Though, due to his nature, he lacks Non-Corporeallity, Pseudo-Abstract Existence Type 3 and Selective Intangibility). Resistance to Transmutation, Disease Manipulation, and Mind Manipulation with Corpse Parts (The Holy Corpse allows the holders to resist Scary Monsters and similar abilities)

Speed: Superhuman, Massively FTL with Scary Monsters (Can keep up with D4C and evade his punches. Stated that his faster than D4C.)

Range: Extended Melee Range with Scary Monsters. The dinosaurs he create have no set range.

Intelligence: Genius, skilled combatant and an ace jockey, is a manipulative person who takes weaknesses to their advantage and analyzes nearly everything an opponent does through habit or trick to completely defeat them. He was able to almost instantly figure out a way to defeat Funny Valentine's body swapping by deciding to kill him instantly and prevent him to use places that may allow him to travel into other universes.

Weaknesses: When turned into a dinosaur, Diego cannot see any still objects or objects moving at a set speed. Scary Monsters will have its effects worn off if Diego is majorly injured or is nullified by an object such as a Holy Corpse part

Scary Monsters: Scary Monsters is a Stand that is bound to Diego's body at all times; the ability itself stolen from a Dr. Fernindad via the Left Eye of the Holy Corpse. Since it is bound to his body, it can fight hand-to-hand with other Stands and damage them, despite being a normal human.