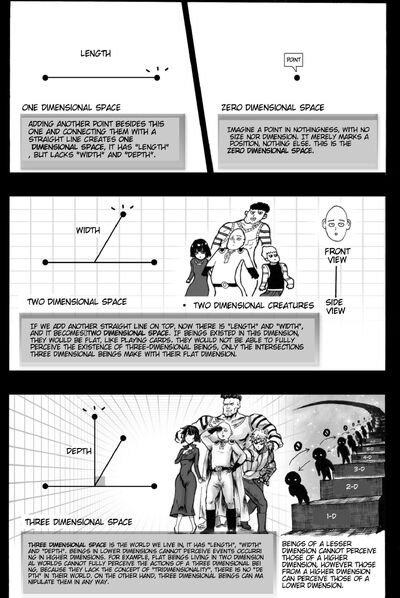 The authority logical meaning of a Dimension is a hub of development, for example, tallness, length, and width.

They are simply the different facets of what we perceive to be reality, the quantifiable degree of your situation inside space, and the size of your being. We are immediately aware of the three dimensions that surround us on a daily basis – those that define the length, width, and depth of all objects in our universes (the x, y, and z axes, respectively).

Beyond these three visible dimensions, scientists believe that there may be many more. In fact, the theoretical framework of Superstring Theory posits that the universe exists in ten different dimensions. These different aspects are what govern the universe, the fundamental forces of nature, and all the elementary particles contained within.

As per M-Theory, our multiverse is made out of 11 measurements. As per Bosonic String Theory, there are 26 of them. Furthermore, there are an endless measure of measurements inside a Hilbert space.

When positioning the strength of characters the common thing to pass by first is material science. In any case, since limitless power and energy are the most elevated levels of solidarity that a character can reach regarding material science there would be no amount of intensity above what is important to annihilate a boundless universe, for example High 3-A.

Henceforth, to recognize the intensity of characters that are depicted better than that sort of intensity, we utilize an idea beside actual strength: The idea of size.

The straightforward thought is that characters who can obliterate a lot bigger structures than others are likely likewise more impressive than them.

Measurements are unequivocally identified with the thought of size, as higher dimensional articles can be seen as being limitlessly bigger than lower dimensional ones. Henceforth we use them as levels of intensity in our tiering system.

A point is an example of a 0-dimensional being. It has no spatial dimensions.

The motivation behind why it is a 0-dimensional being is that it has no pivot of development. A point can't move since it is nothing other than a solitary spec. It will always be limitlessly huge in its own plane of presence which is the 0 measurement. Recorded as 11-C here.

The first dimension, as already noted, is that which gives it length (aka. the x-axis). A good description of a one-dimensional object is a straight line, which exists only in terms of length and has no other discernible qualities.

second dimension, the y-axis (or height), and you get an object that becomes a 2-dimensional shape (like a square).

The third dimension involves depth (the z-axis), and gives all objects a sense of area and a cross-section. The perfect example of this is a cube, which exists in three dimensions and has a length, width, depth, and hence volume. Beyond these three lie the seven dimensions which are not immediately apparent to us, but which can be still be perceived as having a direct effect on the universe and reality as we know it.

when we talk about a fourth dimension, it’s considered space-time. But in truth, it means a spatial dimension beyond the normal three, not a parallel universe, as such dimensions are mistaken for in popular sci-fi shows. 4-D shape would be an infinite stack of 3-D space. The new dimension is labelled ‘w’ and the measurement is called ‘trength.’ The cardinal directions you can travel along it are called ‘ana’ and ‘kata.’ However, the problem arises as to how we would add this extra dimension. All of these dimensional measures extend in a direction perpendicular to the previous three. Width is perpendicular to length, height is perpendicular to width and length, and finally, trength is perpendicular to height, length, and width. Our brains cannot visualize how this dimension would actually be situated on a 4-D object orthogonally.

A misconception about this is that the fourth dimension is time, reason why is because according to Einstein as part of his ‘Special Theory of Relativity’, proposed that the fourth dimension is time. He said time should be a dimension like the other spatial dimensions because space and time are inseparable. If you wish to move through space, you cannot do it instantaneously; you have to move from where you are right now to another spatial location, where you’ll only arrive at a certain point in the future. If you’re here now, you cannot be in a different place at this same moment, you can only get there later. Moving through space necessitates you to move through time as well.

Hence, they argue that time is the 4th dimension since without it, we cannot construct any meaningful position vector with an unchanging length. Time’s dimension is a line going from the past to present to future. Thus, time as the fourth dimension locates an object’s position at a particular moment. If we had the ability to see an object’s fourth dimensional space-time (or world-line) it would resemble a spaghetti-like line stretching from the past to the future showing the spatial location of the object at every moment in time. Unlike the other spatial dimensions, we can only move forwards in time. The other dimensions allow you to move both ways. Hence, they separate time from spatial dimensions and call it a temporal dimension. 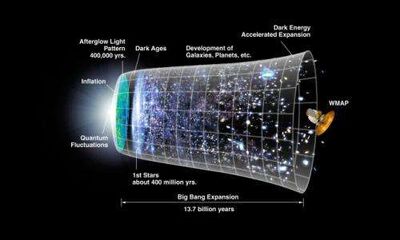 An easy way to grasp this concept is as follows:

A 1-Dimensional (line) object only has length.

This works in the same manner with 3-Dimensional space. The volume of a 3-D object = length x width x height. Since a 2-D object's height = 0, it doesn't matter if its length or width = infinity. Its volume, and mass, will still = 0. 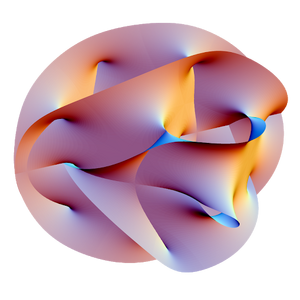 If the extra dimensions are compactified, then the extra six dimensions must be in the form of a Calabi–Yau manifold (shown above). While imperceptible as far as our senses are concerned, they would have governed the formation of the universe from the very beginning. Hence why scientists believe that peering back through time, using telescopes to spot light from the early universe (i.e. billions of years ago), they might be able to see how the existence of these additional dimensions could have influenced the evolution of the cosmos.

Much like other candidates for a grand unifying theory – aka the Theory of Everything (TOE) – the belief that the universe is made up of ten dimensions (or more, depending on which model of string theory you use) is an attempt to reconcile the standard model of particle physics with the existence of gravity. In short, it is an attempt to explain how all known forces within our universe interact, and how other possible universes themselves might work.

Higher-Dimensional Existence refers to characters who belong to higher worlds or planes of reality with a number of dimensions greater than three-dimensional universes. In other words, they have bodies of at least four dimensions. The difference between these characters and those from ordinary space-time reality corresponds to the geometric difference between objects with different numbers of dimensions, such as a two-dimensional square and a three-dimensional cube. This means, it is more than countably infinite, not only quantitatively but also qualitatively. Characters of higher dimensions are often shown to be godlike with respect to lower dimensions, not only because of their superiority in strength but also due to their existence encompassing completely different laws of physics and logic, which are beyond the control of three-dimensional beings. It should be noted that having higher-dimensional power does not mean the character has a higher-dimensional existence, nor does higher-dimensional movement or Immeasurable speed, but some of these do mean that such characters can contend with these beings.

This theory is similar to M-Theory except it just goes up to the 10th dimension. Our physical space is observed to have three large spatial dimensions and, along with time, is a boundless 4-dimensional continuum known as spacetime. However, nothing prevents a theory from including more than 4 dimensions. In the case of string theory, consistency requires spacetime to have 10 dimensions (3D regular space + 1 time + 6D hyperspace). The fact that we see only 3 dimensions of space can be explained by one of two mechanisms: either the extra dimensions are compactified on a very small scale, or else our world may live on a 3-dimensional submanifold corresponding to a brane, on which all known particles besides gravity would be restricted.

This is one of the more unreliable ones given that other variations of it have more compelling information. Bosonic String Theory proposes 26 dimensions of existence.

A Hilbert space is a vector space equipped with an inner product, an operation that allows defining lengths and angles. Furthermore, Hilbert spaces are complete, which means that there are enough limits in the space to allow the techniques of calculus to be used.

Regarding the temporal dimension

This, however, isn't always the case and there can be exceptions where a verse is stated to have multiple temporal dimensions.