All Fiction Battles Wiki
Register
Don't have an account?
Sign In
Advertisement
in: Characters, Villains, Main Antagonists,
and 52 more 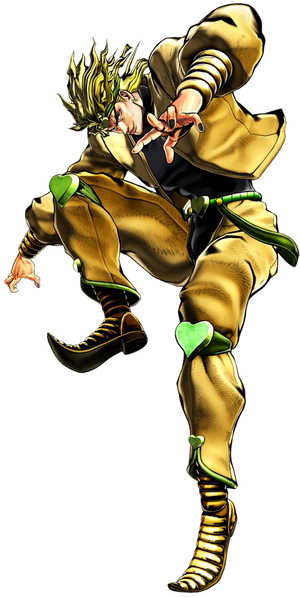 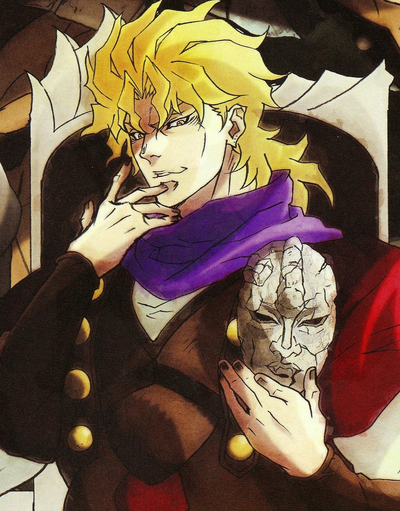 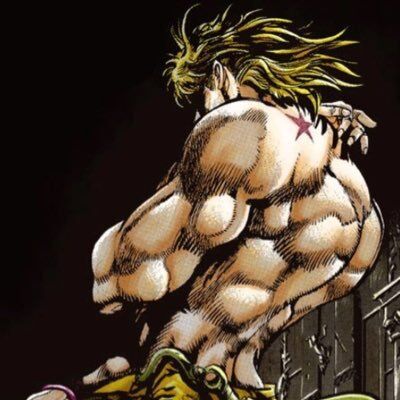 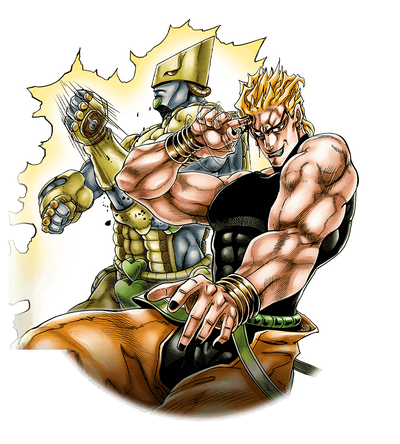 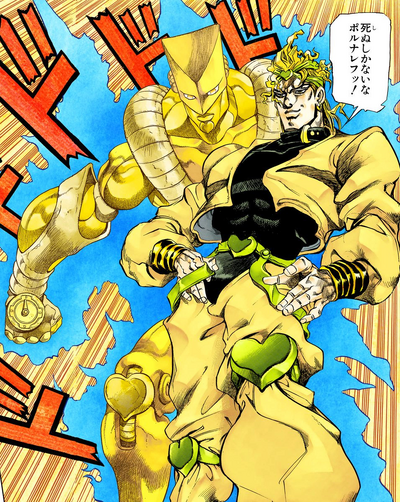 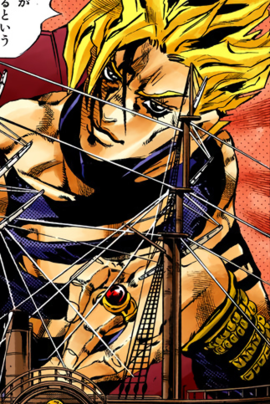 Dio was the son of Dario Brando, who helped George Joestar I by saving his life (Although he just helped because he saw that the carriage that George was in had some precious things such as the Stone Mask), later when Dario died, Dio was adopted by the Joestar family and became the brother of Jonathan Joestar. however, what Dio truly wanted was the Joestar fortune, so that he could take it on his own. he started by making Jonathan's life hell to him (Bullied him, putted his finger into his eye, killed his dog and forcefully kissed his girlfriend). Dio, years later, discovered about the Stone Mask's secret after testing on some random guy. later at the Joestar Mansion, Dio was about to be taken to prison due to his crimes, until he pulled out the Stone Mask and rejected humanity, stabbing through George Joestar and the blood came into the mask, making Dio a immortal vampire. Dio would then fight Jonathan many times, until Jonathan takes Dio down with him on a cruise ship.

However, 100 years later, DIO would wake once again thanks by nearby sailors discovering his coffin. DIO then pierced himself with a Stand Arrow, gaining his stand, The World, whose ability is that of stopping time to his own will. Due to DIO's awakening, Holly Kujo and other Joestars also gained a stand, with the former becoming sick with the risk of death due to not able to control her own stand. thus, Joseph Joestar and Jotaro's group, have to go to Egypt to fight and kill DIO once and for all.

Superhuman Physical Characteristics, Flight, Absorption, Self-Sustenance (Type 1), Regeneration (High-Mid; As a vampire, Dio is comparable to the likes of Vampire Straizo, who is able to regenerate from being blown into pieces by Grenades. Can put his body back up after being bisected by Jonathan's sword), capable of draining the heat and thus freeze the flesh of his opponent, Body Control, Resurrection and Necromancy (Can revive the dead so that they can fight for Dio), Minor Elasticity (Can extend his veins), Water Manipulation, Biological Manipulation (Capable of fusing bodies of other living beings to create chimeras and is capable of transforming others into loyal zombies by inserting his vampiric essence into them), Mind Control (As seen where he hypnotized Poco and controlled Jack the Ripper by just looking at him), Resistance to Pain Manipulation (Can take attacks which could've caused heavy pain on normal beings), Enhanced Senses, Genius Intelligence, Immortality (Types 1, 2, 3 and 6; Can live as a head and was going to take Jonathan's body to live longer)

All previous abilities, plus Extrasensory Perception (Capable of seeing ghosts and souls among some other supernatural forces that are normally otherwise invisible), Flight, Acrobatics (Can make big jumps with flips and mobilize in the air), Social Influencing (His presence and dialogues could generate rather abnormal reactions on others who he related to or just met, ultimately inducing things such as massive fear of him, loyalty or appreciation), Immortality (Types 1, 2, 3 and 6; Survived as just a severed head after being left incapable of healing properly thanks to Hamon, and was able to steal Jonathan's body in this state), Self-Sustenance (Type 1, survived at the bottom of the ocean locked in a coffin for approximately 100 years), Regeneration (Mid; Due to Jonathan's body rejecting him his regeneration has weakened; Still capable of regenerating from a hole in his head), Telepathy ([Spoke to Enrico Pucci despite not physically being present), Mind Manipulation (Can create flesh buds capable of implanting themselves inside a persons brain, forcing them to obey his commands), Fear Inducing Aura (Besides the usual Stand Aura, DIO can emit an aura that causes those around him to get chills, become on edge and in some cases, stricken with a nauseating and crippling fear), Summoning (Of his Stands), likely Non-Physical Interaction (Could interact with Stands on multiple occasions) and Pain Resistance (Usually incapable of feeling pain from anything but the most damaging of attacks to the head). Jonathan's stand has Elasticity, Stand Physiology, Clairvoyance, Technology Manipulation, Mind Reading & Telepathy, limited Resistance to Time Stop (Can move within his stopped time)

All previous abilities, plus enchanhed Regeneration (High-Mid; His regeneration has far improved as he drink Joseph's blood, claiming that this was his greatest high), Aura and Summoning (Of the World)

Lifting Strength: Class M (Superior to Tarkus) | Class M (Comparable to before), Class M with the World (Is on par with Star Platinum)

Standard Equipment: None notable | The World and a number of knives, a Road Roller

Intelligence: Genius. Though he may be arrogant and full of himself, Dio is a cunning, pragmatic opponent who is willing to do anything necessary to succeed in a fight, no matter how underhanded he has to be. He experiments with his powers, not just his vampiric ones but the limits of his Stand, pushing himself further and further in search of strength, which he uses to brutal effect in fights. With The World, DIO does not pull any punches, moving to finish fights as quickly as possible by stopping time and unleashing a lethal strike, though he can be goaded into actually fighting against an opponent. When fighting against Jotaro, DIO utilized everything at his disposal to defeat him, throwing knives at him from a safe distance to test the limits of his ability to move in stopped time before cautiously making sure he was dead. Even then, DIO's next move was to decapitate him anyway, just to be safe.

Weaknesses: Dio is very overconfident, and as a vampire, he will be disintegrated by sunlight and is vulnerable to light-based attacks (Of the Ultra Violet variety or those mimicking the sun or sunlight), which circumvent his regeneration | Same as before. Because Jonathan's body is rejecting him, his strength has diminished and he cannot use his vampiric powers to the same extent. Any damage dealt to The World will be reflected onto DIO, and the Stand weakens the further it moves from him to a limit of 10 meters away. Someone else with the ability to stop time may be able to think and move during The World's stopped time | Due to his new peak of power, DIO has become even more arrogant and psychotic in general temporarily.