All Fiction Battles Wiki
Register
Don't have an account?
Sign In
Advertisement
in: One-Punch Man, Manga Characters, Characters,
and 15 more 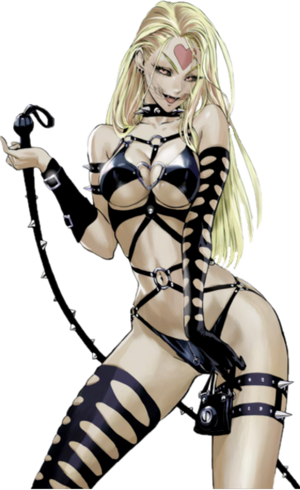 "Monster Princess" Do-S is a Demon-level mysterious being and a member of the Monster Association.

Powers and Abilities: Superhuman Physical Characteristics, Elasticity (She is capable of extending her legs and tongue), Mind Manipulation (Via her Spiked Whip, she can control the minds of people she has hit with her whip), Weapon Mastery (Type. 1, she's very skilled with her whip), Natural Weaponry (Her tongue and stretch and pierce a target), Shapeshifting (She could turn her legs into a snake-like maw).

Attack Potency: City Block level (She's a Demon level threat so she should be superior to Kombu Infinity), likely Multi-City Block level (Damaged the Mercenary Squad with her whip, implied to be on par with them and the three swordsmen).

Lifting Strength: Class 25 (She should not be much weaker than the tiger class seafolk who can lift a box truck)

Mind Control: Do-S possesses the ability to control the minds of others. She achieves this by hitting them with her whip.

Heart ♡ Hard ♡ Hit: Do-S cracks her whip, sending out multiple slashes at once. This attack is capable of knocking multiple people back many meters. Those who are hit by this attack become her love slaves, which she can control freely and she can make them do her bidding.