All Fiction Battles Wiki
Register
Don't have an account?
Sign In
Advertisement
in: Marvel Comics, Characters, Comicbook Characters,
and 24 more 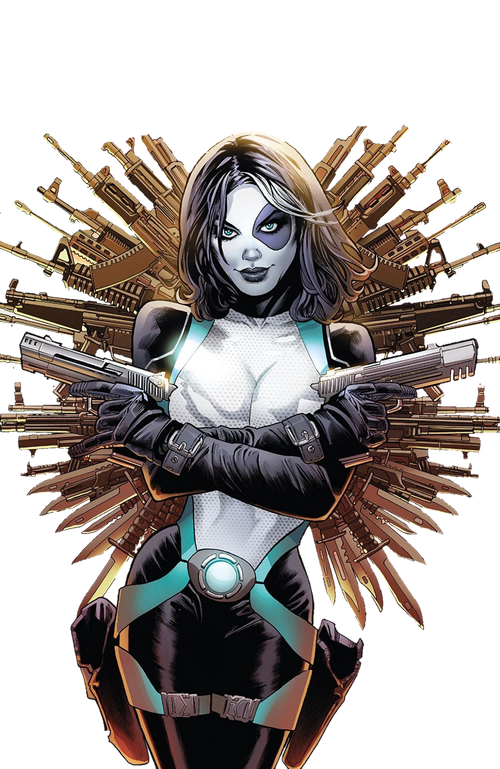 Neena Thurman aka Domino is a character from Marvel Comics. She is best known as a member of the X-Force. Domino made her first full main story appearance in X-Force #8 as a unique individual from the Wild Pack group driven by the mutant Cable. Not withstanding her outstanding marksmanship and hand-to-hand abilities, Domino has mutant likelihood modifying powers, like those of the mutant Longshot. She regularly utilizes her abilities as a soldier of fortune, yet has likewise been the accomplice, partner, and love enthusiasm of the time-traveling superhero Cable, a lieutenant in his aggressor amass X-Force, and an individual from the X-Men.

Powers and Abilities: Superhuman Physical Characteristics, Weapon Mastery (Type. 1, she’s skilled with many different guns in her arsenal), Stealth Mastery (She extremely skilled in espionage), Supernatural Luck, Probability Manipulation and Instinctive Reaction (She will subconsciously make events happen to her which will fall in her favor and her body will subconsciously follow the luck to make her avoid hits occasionally), Acrobatics (She can perform many flips to avoid gun fire and to make it through laser sensors), Preparation (Domino always comes prepared with a multitude of hidden weapons on her and preplans counters measures), Martial Arts (Type. 4), Hacking (She carries a lab top to hack many security doors and locks), Explosion Manipulation (If her lab top is opened by someone other than her it’ll explode), Enhanced Senses (She has goggles that can switch between infrared vision, thermographic vision and night vision), Pain Tolerance (Type. 1, she could withstand a shock from a taser as a child), Vehicular Mastery (She skilled with many vehicles).

Speed: Supersonic (She is able to avoid gunfire while running), Massively Hypersonic+ combat and reaction speed (She's faster than Cable and was able to evade his attack)

Lifting Strength: Peak Human (She could hold 3 people up with one arm)

Stamina: High (She is able to do extended missions that'll last days and can take multiple hits while doing it)

Probability Manipulation: Domino is a mutant with the ability to subliminally and psionically initiate random kinetic phenomena that affect probability in her favor by making improbable (but not impossible) things to occur within her line of sight, thus causing her to have "good luck" and her opponents to have "bad luck." This phenomenon can be anything from an enemy's equipment failure to hitting just the right switch with a stray shot to shut down an overloading nuclear reactor.