All Fiction Battles Wiki
Register
Don't have an account?
Sign In
Advertisement
in: Sonic the Hedgehog, Geniuses, Preparation Users,
and 55 more 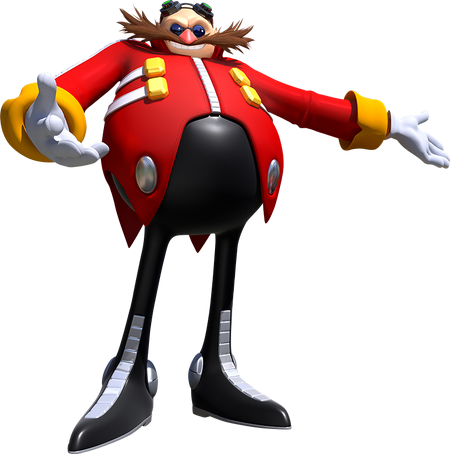 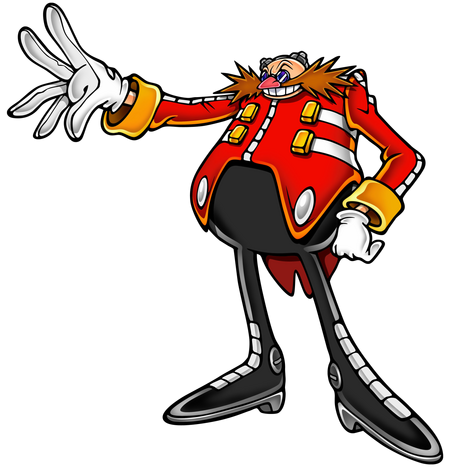 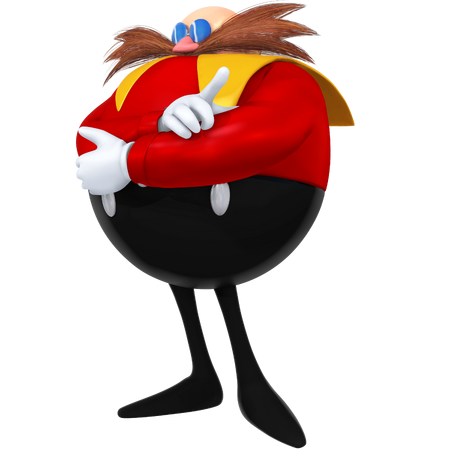 Doctor Ivo Robotnik (ドクター・ロボトニック Dokutā Robotonikku?, lit. "Doctor Robotnik"), better known by the alias Doctor Eggman (ドクター・エッグマン Dokutā Egguman?), is the main antagonist of the Sonic the Hedgehog series. He is a human scientist and the archenemy of Sonic the Hedgehog. This large scientist with an IQ of 300 dreams of dominating the world, but his constant plots to create his Eggman Empire are always thwarted by Sonic and his friends.

While the doctor's plans initially consisted of building incredible armies by turning animals into robots and using them to dominate the land, Dr. Eggman's schemes have since branched into much more global threats as he built war machines, used nuclear devices to threaten entire nations, and even relied on mythological and ancient deities bent on destruction to achieve his goals. Eventually, the mad scientist has gone as far as to target the entire universe and cooked up schemes to control time and space itself.

While all these plans end in failure thanks to the continued efforts of Sonic and his friends, the mad doctor is somehow always able to slip away from certain death or imprisonment and escape at the last moment, making him a constant threat to the universe and a thorn in Sonic's side.

Superhuman Physical Characteristics, Genius Intelligence, Preparation, Expert Mechanic and , Flight (With Extreme Gear), Self-Sustenance (Type 1. He can breathe and talk in outer space like many other Sonic characters) and Flight (Via Jetpack and Eggmobile), Gas Projection (Via Eggmobile), Energy Projection (Via Laser gun), Acausality (Type 1), Non-Physical Interaction (Can capture ghosts with his capsules), Resistance to Time Manipulation/Time Stop and Age Manipulation (Is able to traverse Little Planet to put his robot transporters all over it and even is capable of holding Time Stones, the mysterious Time Stones are said to be able to turn a desert into a jungle, and a polluted lake into a beautiful lake by crossing through time, which would also affect the life inside of it. Able to move normally even after he activates a Time Switch, which freezes enemies in place and stops the in-game counter. Can move within White Space, an area where Time doesn't exist)

Same as previously, Information Analysis, Summoning, Poison Manipulation, Self-Destruction, Portal Creation, Can create mini-stars, Perception Manipulation, Pocket Reality Manipulation, Homing Missiles, Levitation, Vibration Emission, Duplication of others (Can materialize thousands of clones of Shadow, Chaos 0, Zavok, Metal Sonic, and Infinite to aid him in combat), Aura, Dimensional BFR (Scaling from Infinite), Life Force Absorption (Can drain a planet’s life energy with the Extractor), Mind Manipulation (Of Planetary potency; Capable of mentally enslaving a world’s population with the Mind Control Ray and Brainwash Beam), Gravity Manipulation (His robots can negate gravity), Transmutation (With the Roboticizer and his camera; Planetary range with the Egg Destroyer), Black Hole Creation, Elemental Manipulation, Electricity Manipulation, Lava Manipulation, Earth Manipulation, Danmaku, Omnidirectional Shock Wave Generation (Which induces dizziness upon impact), Ice Manipulation, The Final Egg Blaster yields immense destructive power to destroy planets and solar systems, Space Travel, while the Time Eater has Time Manipulation (Ranging from Time Travel, slowing down time, and destroying it. Able to send points in time to a white zone of non-existence), Can detach its arms and telekinetically control them, Existence Erasure, Able to stun foes with Restraint Trap, Able to create holes in time, Can travel to timelines that should not and don't exist, Spatial Manipulation and Creation (With the Egg Salamander), Fusionism of two universes, Resistance to Space-Time Erasure (Unaffected by a place of destabilized space-time and the erasure of space-time), Extreme Cold, and Cosmic Radiations

Healing (With the Replenisher, Health Roots, Health Seeds, Antidotes, and Health Leaves), Statistics Amplification (With Golden Gloves and Speed Bar), Fear Inducement (With the Spooky Charm), Elemental Manipulation (Of Water, Electricity, Ice, Wind, and Earth varieties via elemental Rings), Resurrection (With the Angel Amulet and Ring of Life), Life Force Absorption (With the Nocturne Blade), Gravity Manipulation and Psuedo-Black Hole Creation (With the Ark of the Cosmos), Resistance to Status Effect Inducement (With the Immunity Idol). With Chao: Statistics Amplification (With Cheezlet and Blayze, attacks do much more damage), Damage Reduction (With Velk and Gibber, damage from attacks are greatly reduced), Healing (With Stebsly and Joy, vitality is regenerated over the course of a fight), Resurrection (With Ovus, their partner is automatically brought back up to three times in one battle), Probability Manipulation (With Koolet, Belgog, Fimbley, and Stugs, enemy attacks have a greater chance of missing. Churdle and Oldarg give a higher chance of hitting the opponent. Keroyo increases the chance of an enemy fleeing. Spartoi grants a chance to instantly knock out the opponent with every attack done), Shield Creation (Can make passive shields of fire, water, wind, lightning, and earth that stay even after being hit), Elemental Manipulation (Can imbue his attacks with fire, water, wind, lightning, earth, and ice), and Damage Transferal (With Pooki, damage taken is split between teammates). With the Color Powers: Transformation, Fire Manipulation and Explosion Manipulation (With Red Burst and Black Bomb), Vibration Manipulation (With Blue Cube and Gray Quake), Energy Projection (With Cyan Laser and Crimson Eagle), Electricity Manipulation (With Ivory Lightning), Invisibility (With Jade Ghost), Transmutation, Pseudo-Black Hole Creation, Gravity Manipulation, Size Manipulation, and Absorption (With Indigo Asteroid, Violet Void, and Purple Frenzy), Intangibility (With Violet Void), Flight and Levitation (With Crimson Eagle, Green Hover, Indigo Asteroid, Magenta Rhythm, Orange Rocket, and Violet Void), Void Manipulation (With Violet Void)

Attack Potency: Wall level (Can physically smash a solid ice wall with his bare hands) | Large Planet level (Can match Classic Sonic while being powered up by a weaponized Egg Mobile with a Chaos Emerald) | Multi-Solar System level (Fought and restrained Super Sonic by using one of his machines) | Varies from Large Planet level (Can match Adventure Sonic) to Dwarf Star level (Can fight against Modern Sonic while using the Death Egg Robot and the Egg Dragoon) to Multi-Solar System level (Can use the Final Egg Blaster to destroy a nearby constellation) to At least Universe level+ (With the Time Eater and the Egg Salamander) to Low Multiverse level (With the Time Eater) to Multiverse level (With the Egg Wizard)

Speed: Superhuman (Fast enough that, when given a head-start, he is capable of staying ahead of a casual Sonic long enough to reach a mech and get inside before Sonic is able to stop himself) | FTL+ (Capable of keeping up with Classic Sonic) | Massively FTL+ (Kept up with Super Sonic) | Varies from at least FTL+ (Capable of keeping up with Adventure and Modern Sonic) to Massively FTL+ (Destroyed a nearby constellation outside the Solar System while near the Earth with the Final Egg Blaster usage. Scales to Super Sonic with the Egg Salamander who could fly from Earth to the Exception Zone in seconds) to Immeasurable (Managed to keep pace against a full powered Super Sonic, who could move faster than Solaris could react at his strongest)

Durability: Large Planet level to Dwarf Star level (From the Classic era to Modern he has withstood an explosion that obliterated a mech tough enough to fight on par with Sonic, and regularly survived multiple direct hits from the latter and other comparable characters, as well as his own explosives designed to harm the likes of Shadow) | Large Planet level | Multi-Solar System level | Varies from Large Planet level to Dwarf Star level to At least Universe level+ to Low Multiverse level (Briefly withstood a combined assault of Super Sonic and Burning Blaze while using the Egg Salamander and tanked attacks from Classic Super Sonic while using the Time Eater) to Multiverse level (Could tank attacks from both while using the Egg Wizard)

Range: Standard melee range, higher with laser gun. Ranges from hundreds of meters to Planetary to Interstellar to Universal+ with machines

Intelligence: Extraordinary Genius. He has an IQ of 300, as well as being able to create various machines that far surpass modern weaponry

Weaknesses: Immature and short-tempered, has little direct combat experience outside of using his machines | Varies depending on the machine

Key: By himself | Classic Machines | With Super Egg Robot | Adventure and Modern Machines