All Fiction Battles Wiki
Register
Don't have an account?
Sign In
Advertisement
in: Sonic the Hedgehog, Weapons, Fusionism Users,
and 20 more

The Egg Wizard (エッグウィザード Egguu~izādo?) is the hidden true final boss of Sonic Rush Adventure. It is a giant wizard-theme mecha that was used by Dr. Eggman and Dr. Eggman Nega to harness the Power of the Stars with the Jeweled Scepter. However, it was destroyed by Super Sonic and Burning Blaze.

Attack Potency: Multiverse level (Obtaining the Power of the Stars, the Egg Wizard can sustain the existence of parallel dimensions and use said power to merge both Sonic and Blaze's worlds and rule as it's king with the inclusion of countless different dimensions, was able to kept pace with a Super Sonic and Burning Blaze fully powered by the Chaos Emeralds and the Sol Emeralds)

Speed: Massively FTL+ (Capable of maintaining his own with the speed of Super Sonic and Burning Blaze)

Durability: Multiversal (Took hits from a full powered Super Sonic and Burning Blaze and could keep pace with the attacks of both)

Standard Equipment: The Jeweled Scepter powered by the Powers of the Stars.

Intelligence: Its pilots are skilled supergeniuses.

Egg Wizard harnessing the Power Of The Stars 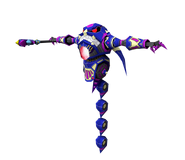