All Fiction Battles Wiki
Register
Don't have an account?
Sign In
Advertisement
in: Characters, Female Characters, Antagonists,
and 48 more

Eleonore von Wittenburg (エレオノーレ・フォン・ヴィッテンブルグ, Ereonoore fon Vittenburugu), also known by her Demon Name Samiel Zentaur (ザミエル・ツェンタウァ, Zamieru Tsentaua) and later as Rubedo: the Red Knight (赤騎士ルベド, Aka Kishi Rubedo) is a member of the Longinus Dreizehn Orden, occupying Seat IX in the Black Round Table. As the most loyal and closest underling to Reinhard, she will go on to become an Einherjar and one of the Three Knights, part of the leading echelons of the Longinus Thirteen, and an essential player in the completion of the Transmutation of Gold.

Superhuman Physical Characteristics, Martial Arts, Weapon Mastery, Immortality (Types 1, 3, 5 and 8. Einherjar are immortal, the concept of death doesn't exist for them, and will fight for all eternity as long as Reinhard Heydrich exists), Regeneration (Low-Godly. Ewigkeit users can reform their bodies from their disimbodied souls and can regenerate from any damage as long as their soul is intact), Intangibility & Non-Corporeal (Can exist in a spiritual state), Self-Sustenance (Types 1, 2 and 3), Extrasensory Perception (Ewigkeit users are capable of seeing and comprehending what is normally invisible to the human eye), Enhanced Senses (Her senses are beyond those of normal humans), Non-Physical Interaction & Soul Manipulation (Ewigkeit users can absorb and devour souls, as well as destroy them with mere conventional attacks. Can also interact with Methuselah who is the embodiment of darkness), Empowerment (Ewigkeit users becomes stronger as they eat souls), Law Manipulation (Briah users imposes their law into reality which can also overwrite the laws of Mercurius's world to an extent), Reality Warping (Ewigkeit users forces their deepest desires into reality through their Briah), Durability Negation (Her attacks affects the body and soul), Regeneration Negation (Low-Godly. Ahnenerbe carries a poison that negates the regeneration of the soul), Sound Manipulation (Could amplify the sound of her voice to reach all of Berlin), Summoning (Can summon various objects related to the concept associated with her Ahnenerbe. In her case, they are the various conventional weapons used by the German Army in WW2. From landmines, hand-grenades, assault rifles, even anti-tank and anti-air guns), Fire Manipulation (Can produce flames that are as hot as nukes. Can create flames out of nowhere such as from empty spaces, as well as creating spears of fire that burns the target from the inside), Spatial Manipulation (The materialization of her cannon warps space itself), Homing Attack (Her cannons's flames seek out her targets until they are consumed, regardless of their speed), Heat Manipulation (Her cannon can induce explosions that burns at several thousand degrees Celsius), Teleportation & BFR (Her Briah teleports her target into a World of ceaselessly burning hellfire inside the barrel of her Relic that is impossible to escape), Overwhelming Aura (Can induce a tremendous spiritual pressure upon others), Resistance to Magic, Mind Manipulation, Fear Manipulation & Madness Manipulation (LDO members can fight and endure Methuselah's presence, which can cause others to go into madness just from looking, hearing or reading about his heritage, to the point that they and their future generations are cursed with the madness of his existence, causing them to either go insane, kill themselves or outright die due to the sudden shock of having all the mental fears implanted into them, which could affect even fetuses who were in their mothers womb), Soul Manipulation (On a scale of hundreds of thousands of souls), Biological Manipulation, Poison Manipulation (Apostles are naturally resistant to drugs and poison), Power Nullification (Ahnenerbe users can't be nullified), Disease Manipulation, Electricity Manipulation (Unnafected by Tubal Cain's lightning)

All previous abilities on an unimaginably higher level, in addition to all the abilities and weaknesses of a Hadō God such as Superhuman Physical Characteristics (Are literal Gods that possess physical strength unimaginably greater than that of a human)

Likely Telepathy (All Hadō Gods likely have the same ability as Mercurius, who spoke to Shirou in his mind)

Attack Potency: Mountain level (Casually vaporized Tubal Cain, who is among the strongest members of the LDO, and can shatter mountains) | At least Large Planet level, likely higher (Stronger than a boosted Wilhelm, who could destroy Methuselah's Jaws of Darkness, which have a density of a hundred nights, with each night being equivalent to half of the planet) | High Ascendent level (She is boosted to the same level of existence of Reinhard Heydrich)

Stamina: Limitless (Einherjar have a limitless supply of life/soul from Gladsheimr)

Range: Hundreds of meters to kilometers with normal attacks. Potentially Universal with her cannon (The flames of her cannon continously expands infinitely until it consumes and burns away her foes) | High Ascendental

Intelligence: Genius (Has lived through thousands of battles and seen thousands of deaths, and can read people's movements even if they are invisible or faster than her. Whereas Machina excels in pure combat prowess and Schreiber reigns in superior speed to overwhelm his enemies, Eleonore's expertise lies best at fighting at a distance. With her use of fire powers and her Ahnenerbe, Eleonore can take on an army on her lonesome. She also can overwhelm fast foes by cornering them with many blasts of fire, then hitting them with more stronger attacks when they're vulnerable. Her experience in Gladsheimr has even made her composed and calculating in the heat of battle, even being able to dodge attacks from her former subordinate with her eyes closed)

Weaknesses: Her Briah only lasts for dozens of minutes. 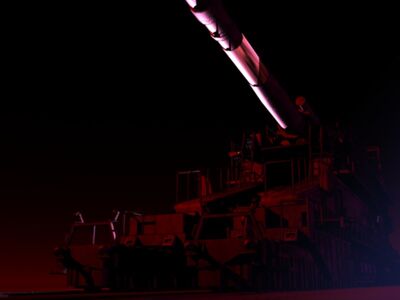 : The Ahnenerbe of Eleonore, Materialization Type. It is the Dora Railway Gun, a thirty-meter barrel long artillery weapon created by Nazi Germany in the time of WW2.

A mass of steel and destruction that originally fired powerful shells, it was changed to instead shoot powerful blasts of fire capable of burning at temperatures of several thousand-degree celsius. The power of this railway gun is strong enough to destroy whole surroundings including taking out normal members of the LDO, who are all capable of tanking and surviving all of the world's conventional weapons, including nuclear weapons, in one shot. Due to its nature as an Ahnenerbe, it can even burn the soul to cinders, and combined with its unique property to "never miss", her flames will expand continuously until all of her targets are completely destroyed.

Such a large railway gun isn't the only thing that came with Eleonore as her Ahnenerbe. As a large mass of destruction that moved with the army and required several thousand personal to fully operate it, Eleonore, much like Rusalka and her Ahnenerbe, can summon various objects related to the concept associated with her Ahnenerbe. In her case, they are the various conventional weapons used by the German Army in WW2. From landmines, hand-grenades, assault rifles, even anti-tank and anti-air guns], she can overwhelm her enemies in numbers with these from a distance even without having to use her main Ahnenerbe. And while not as devastating nor as powerful as her railgun, they can still damage the normal members of the LDO due to their nature as Ahnenerbe. 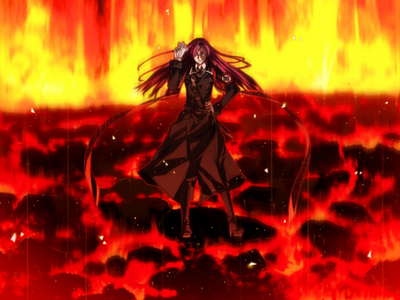 : Eleonore’s Hadou-type Briah, derived from her desire “I want to burn forever in the glow of Gold". Born in her quest to be embraced in the Gold of Reinhard's Valhalla, her Briah takes the form of an all-expanding explosion that burns everything and everyone until all of Eleonore's enemies are caught and burned to ashes and cinders. An ability that allows her to burn down even whole cities, capable of annihilating large masses of people in her lonesome. However, this is something she only created for the purpose of eliminating "cannon fodder". Should she be in a situation where her honor as a knight is made to fight another like her, Eleonore will unleash the true form of her Briah, where it teleports her target into a World of ceaselessly burning hellfire inside the barrel of her Relic that is impossible to escape.

In this World of ever-burning flames, Eleonore can fully exercise the full potential of her never missing attacks, creating spears and balls of fire capable of burning her target inside-out and with a heat capable of matching that of the center of a nuclear explosion. Even the fires of her Briah itself are passively burning her enemies down with each moment inside, and the flames will continue to burn, even in the face of Machina's fists, who cannot completely erase them, and Schreiber, whose speed allows him to completely avoid direct assault, will still be scorched alive by the World's flames around him. As a last resort, Eleonore can even condense all of her Briah's flames into the form of a giant fire sword, using it to pierce her enemy through with no way to avoid or defend against it.