All Fiction Battles Wiki
Register
Don't have an account?
Sign In
Advertisement
in: Gears of War, Characters, Female Characters,
and 14 more 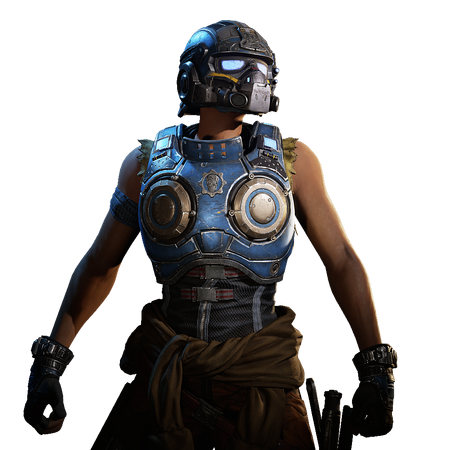 Corporal Elizabeth "Lizzie" Carmine was a member of the Carmine Family and the niece of Clayton Carmine. She served in the Coalition of Ordered Governments Army and Engineering Corps in the Interwar Period as a Minotaur driver in the motor pool and was also a capable Gear.

Powers and Abilities: Superhuman Physical Characteristics, Weapon Mastery (Type 1. She's a skilled marksmen), Martial Arts (Type 3), Explosion Manipulation (Via Bolo Grenade), Vehicular Mastery, Damage Boost (Via Active Reload, if successfully done it’ll boost the damage of the remaining rounds that were in the gun before the reload), Statistics Amplification (Via Active Reload, if successfully done it’ll increase the reload speed and the fire rate of the gun), Resistance to limited Poison Manipulation (The COG helmet has a built in filtration system which helps against most poison except for ones as strong as the Ink Grenades).

Attack Potency: Small Building level (She's able to cut Swarm in half with her Lancer and is comparable to Kait Diaz, James Dominic Fenix and Delmont Walker), higher (Active Reload increase the damage of the shots that remand during the reload)

Speed: Subsonic (She can keep up with Kait Diaz), Speed of Light reaction speed (She should be comparable to Anya Stroud) Supersonic attack speed with Mk 3 Lancer Assault Rifle and Enforcer Submachine Gun, higher attack speed (Active Reload can increase the rate of fire of some weapons)

Durability: Small Building level (She can take attacks from Swarm and is comparable to Kait Diaz, James Dominic Fenix and Delmont Walker)

Stamina: High (She should be comparable to Kait Diaz)