All Fiction Battles Wiki
Register
Don't have an account?
Sign In
Advertisement
in: Characters, Female Characters, Monsters,
and 24 more 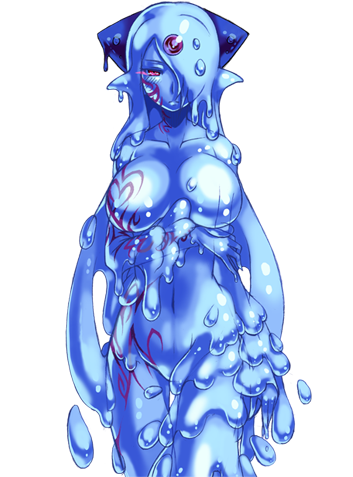 Erubetie is the Queen Slime, as well as one of the Four Heavenly Knights serving Alipheese Fateburn XVI. Unlike other Heavenly Knights, she is actively hostile against humans, due to accusing them of polluting her homeland. Thus she spends most of her time in isolation, inside Undine's Spring.

Although she represents the element of water, she does not attempt to teach Luka how to use Undine due to her hatred of humans, forcing him to learn through Granberia. Instead, he gets to learn how to use Salamander to bypass her regenerative body.

In the Paradox Timeline, she remains loyal to the Monster Lord in a similar manner to Granberia, although many of her personalities are in disagreement over this, causing Erubetie as a whole to be unable to fully carry on her tasks.

Standard Tactics: She will usually use powerful slime attacks and try to consume the opponent quickly. She will use Colony Fusion only as a last resort.

Weaknesses: Certain vibrations can kill her cells, preventing her from regenerating