All Fiction Battles Wiki
Register
Don't have an account?
Sign In
Advertisement
in: Characters, Good Characters, Protagonists,
and 38 more 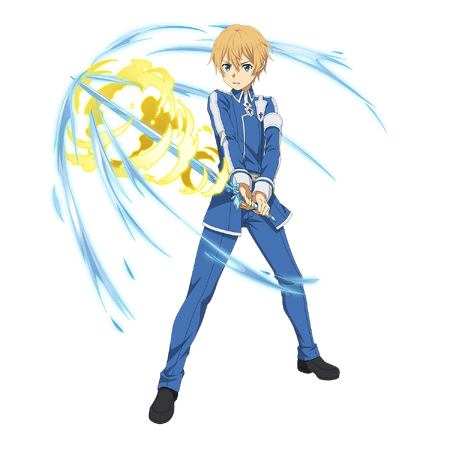 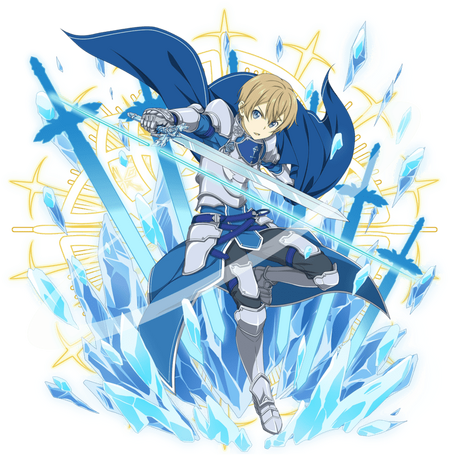 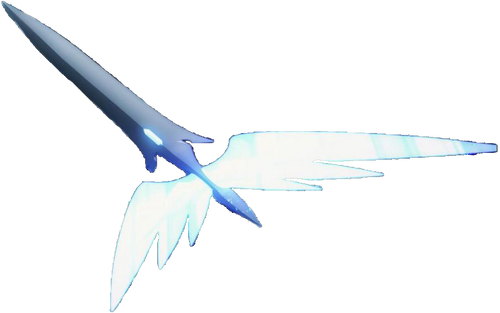 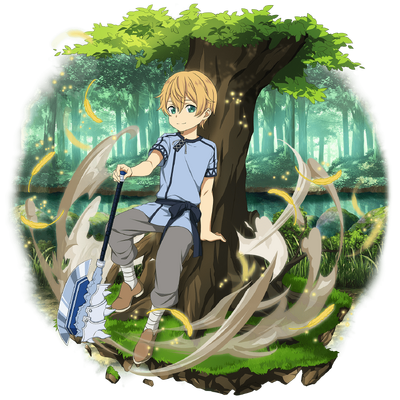 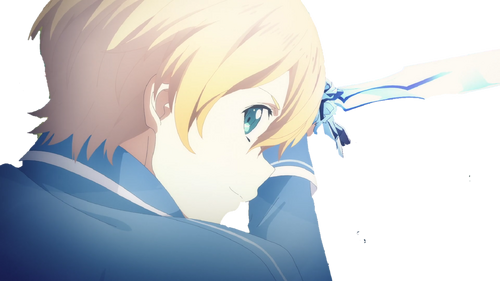 Eugeo (ユージオ, Yūjio) is the deuteragonist of the first half of the Alicization Arc. Eugeo is a child born in a remote village in the Human Empire of Underworld, where he was assigned the Sacred Task of felling a giant tree with his childhood friend Kirito. After a mishap during an adventure to the mountains resulted in his other childhood friend, Alice Zuberg, being apprehended by an Integrity Knight for breaking the Taboo Index, Eugeo's memories of Kirito were sealed by the administrators of the world, leaving him all alone. Eugeo spent the following six years focusing on his work to avoid thinking about Alice, until Kirito's return to Underworld led to Eugeo building the resolve to embark on a journey to become an Integrity Knight himself to rescue Alice.

Skilled Woodcutter, Accelerated Development (Leveling; Physical Stats, Abilities). Passive Reality Warping (via Incarnation. As with all VR avatars, especially in the Underworld, Incarnation grants all the ability to alter reality via their conscious and subconscious belief and willpower, and can be described as many people sharing a single dream, with greater control of Incarnation being likened to "lucid dreaming"). The primary applications of Incarnation are as follows: Empowerment, Statistics Amplification and Statistics Reduction (Belief in one's own strength will amplify one's own power, however the opposite can happen to the user as well if they are not confident in a matchup), Limited Law Manipulation (If enough people believe that something cannot happen, it will become impossible and vice versa), and Probability Manipulation (If an Incarnation user truly believes that they are weaker than their foe, even subconsciously, reality will be rewritten to ensure their defeat (and vice versa). If both sides are both completely confident in a battle, it will be a battle to see who's mental willpower is stronger than the other), Immortality (Type 8; Characters in the Underworld can't die as long as their fluctlight isn't destroyed), Unconventional Resistance to Soul Manipulation and Matter Manipulation (The souls in Sword Art Online are described as being made of quantum fields)

Same as previous, in addition to Immortality (Types 1 and 2; Turned into a sword), Flight, Large Size (Type 0)

Invisibility (Enemies can't see him), Non-Physical Interaction (Able to interact with Subtilizer, a being made out of amorphous darkness), Non-Corporeal (Exists as a spirit)

Attack Potency: Athlete level (Able to deal chip damage to the Gigas Cidar, stating that it will take multiple more generations after him to actually fell the massive tree. Able to temporarily hold back Lizard Killer Ugachi for a few swings) | Wall level physically (Comparable to Kirito, and it has been stated multiple times that Eugeo was stronger), higher with Sacred Arts (Normally more powerful than standard physical blows. Superior to Kirito, as Eugeo has more practice in Sacred Arts), at least Wall level with Incarnation (Manage to catch Bercouli off-guard), Building level+ with Enhance Armament (Should not be inferior to Deusolbert's own Enhance Armament when used at full power. Required Alice to use her Enhance Armament to break free), Multi-City Block level, likely Town level with Blue Rose Sword's Enhance Armament (Should not be inferior to Kirito's own Enhance Armament with the Blue Rose Sword) | Town level (Destroyed the Sword Golem, which would at least have the Durability of a Divine Object, and clashed with Quinella's Sacred Arts, eventually slicing off one of her arms. Powered by Cardinal, who is Quinella's near equal) | Small Country level, likely Solar System level (Clashed with Dark God Vector)

Speed: Athletic Human (Can keep up with Kirito and Ugachi for a few swings) | Superhuman (After leveling up significantly from the goblin battle, Eugeo is able to compete with Integrity Knights) with Relativistic reaction speed (Is able to keep up with Kirito as an Integrity Knight, despite him wearing heavy armor and the former wearing a light coat. In Sword Form, he caught Quinella off-guard) | Unknown, likely Subsonic with Relativistic reaction speed (Comparable to Dark God Vector and Kirito with Enhance Armament and Release Recollection)

Durability: Athlete level (Tanked a hit from Lizard Killer Ugachi, however he was going to eventually bleed out) | Wall level physically, higher with Sacred Arts (Superior to Kirito), at least Wall level with Incarnation (Survived a non-lethal Enhance Armament slash from Bercouli), Multi-City Block level, likely Town level when blocking with the Blue Rose Sword (Divine Objects can withstand their memory release forms, all of which are on this level) | Town level (Destroyed the Sword Golem and clashed with one of Quinella's Sacred Art attacks, albeit he eventually shattered in the process. Completely ignored Quinella's barrier and cut off her arm) | Small Country level, likely Solar System level (Traded blow for blow with Dark God Vector)

Stamina: Virtually Infinite physically (Just like normal Virtual Reality Avatars, however the difference being that if one ran out of "stamina", they would begin taking damage to their Life), Vastly Superhuman mentally (Was able to stay conscious after being cut in half. Should be comparable to Kirito)

Intelligence: While academically unknown, Eugeo has a high combat intelligence and is a swordsman expert after being trained by Kirito, being able to surprise Bercouli— a war veteran with over three centuries of combat experience.

Weaknesses: Held back by rules and doesn't have free will by having to follow the Seal of the Right Eye | Most of the time, to activate Sacred Arts the user must chant out the words required to activate it. Sacred Arts require "spatial resources" to use, meaning that barren environments would lessen the effects of a Sacred Art. Sword Skills have a slight post-motion stun at the end of them in exchange for increased power (Though Skill Connect negates this weakness). Because of Incarnation's passive nature based on the imagination and willpower of the individual, at worst, if the user thinks a situation is hopeless or impossible to succeed, Incarnation will instead have a negative effect and make that situation true | Can only enter Sword Form through someone with extensive Sacred Art knowledge or is an admin themselves, such as Quinella and Cardinal.

Note: These are not all of the techniques in the style that Eugeo knows, but rather the ones he used most prominently.

Note: These are not all of the techniques in the style that Eugeo knows, but rather the ones he used most prominently.

Sacred Arts: «Sacred Arts» are System Commands in Project Alicization that residents of Underworld believe to be magic rituals. In reality, they are just words used to arrange thoughts and guide the emotions of the caster to make use of one's imagination power. Because of this, the imagination of the user may either improve or decrease the effectiveness of an art.

Incarnation: A secret skill passed down by Integrity Knights since ancient times, and one of the most important concepts in the Sword Art Online franchise. Incarnation refers to the ability to change the state of the world through pure willpower and imagination. For any other virtual reality world, it is a system glitch, usually activated in times of extreme emotion or during extreme brain activity, allowing closer access to one's Fluctlight, or soul, to temporarily change the world around them. For residents of the Underworld, it is a constant passive that dictates whether they succeed or fail in anything. The more confident one is in their abilities and the more of a positive reputation they have, the more the world shall bend in their favor. It is the power which Sacred Arts derive from. Its effects are versatile, as the power has been used to wield invisible blades, create swords from the user's blood, transmute objects, increase the chances of an event happening, and much more. However, the power of an Incarnation ability can be matched by another Incarnation ability, and the use of Incarnation is mentally exhausting, requiring a lot of concentration and energy to perform. If the user is in a state where their will is not strong enough, they become unable to use Incarnation. There are a limited amount of people who can use Incarnation to its full potential, and much practice and experience are needed to be able to use it. This ability is most prominent in the Underworld, as this ability is one of that world's core mechanics. However this ability has also been shown multiple times throughout the series before the Alicization arc.