All Fiction Battles Wiki
Register
Don't have an account?
Sign In
Advertisement
in: Characters, Tier 7, Male Characters,
and 16 more 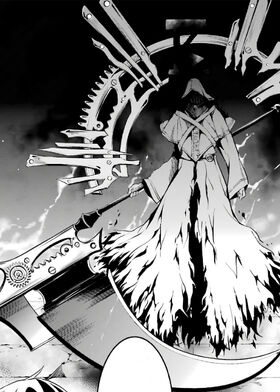 Eugo La Raviaz (エウゴ・ラ・ラヴィアズ, Eugo Ra Raviazu) is the Guardian Deity of Time. When Anos Voldigoad tried to turn back time in order to save Misha Necron, Eugo arrived to stop him from changing the past.

Powers and Abilities: Superhuman Physical Characteristics, Extrasensory Perception (Can sense the flow of magic power), Immortality (Types 1, 3, 4 and 8. Eugo is described as an existence that is timeless, permanent and immortal. Can resurrect as long as his source exists), Regeneration (High-Godly. Can heal from any damage taken by rewinding his time, as long as his source is intact. All gods can regenerate from source (concept) destruction), Abstract Existence (Type 1. Gods maintain and embody the order and laws of the world. Eugo embodies the Order of Time), Limited Reactive Power Level (The torch flares up with renewed vigour just before it extinguishes, and uses it to overcome extinguishment. In other words, as a person approaches their own death, they gain a permanent yet limited increase in power, which they can then utilise in an attempt to prevent their own death), Flight, Healing, Resistance Negation (Gods' powers can only be resisted by other gods), Power Nullification (Gazelta reverses time for any magic that touches it, returning it to a state where it wasn't cast), Time Manipulation and Time Stop (Eugo is capable of manipulating time in numerous ways, such as stopping time, accelerating time, rewinding time, cutting and erasing powers by devouring their time, healing wounds by reversing time, etc), Resistance to Time Manipulation and Time Stop, Deconstruction, Sleep Manipulation, Mind Manipulation (Is unaffected by Sasha's demon eyes of destruction which cause whatever she looks at to disintegrate, which can also put people to sleep or disintegrate their minds)

Speed: Subsonic (Can move faster than the eye can see)

Intelligence: Above Average (Is able to make good decisions during battle, like choosing to merge with Ivis Necron to improve his chance of victory against Anos Voldigoad.)

Weaknesses: Is mostly limited to abilities involving the manipulation of time.