All Fiction Battles Wiki
Register
Don't have an account?
Sign In
Advertisement
in: Sonic the Hedgehog, Machines, Weapons,
and 2 more 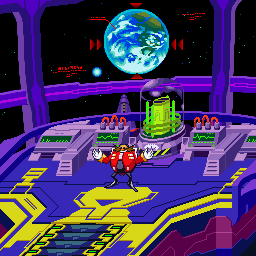 The Final Egg Blaster is a weapon created by Dr. Eggman, being one if not, some of the most powerful creations he has ever build.

It's a weapon capable of destroying planets and stars, originally launched on stars outside the Solar System to reactivate Emerl's original progamming, so that the latter could use the dangerous weapon to obliterate the entire Earth. thankfully, Emerl was defeated by Sonic and the weapon was shut down.

Age: Unknown, but likely build before the events of Sonic Battle

Powers and Abilities: Holds power to destroy not only planets, but entire stars as well.

Speed: Massively FTL+ (Can fly past interstellar distances and can reach nearby constellations in seconds)

Range: Interstellar (Can reach up to several stars)