All Fiction Battles Wiki
Register
Don't have an account?
Sign In
Advertisement
in: Bendy and the Ink Machine, Characters, Male Characters,
and 11 more 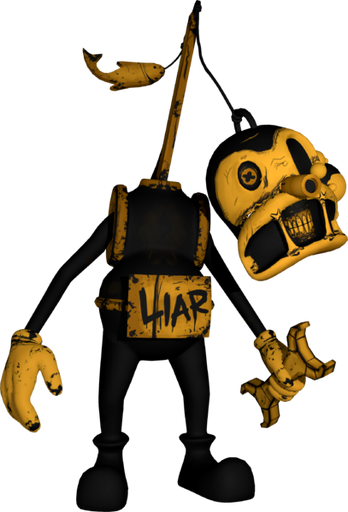 Fisher is one of the physically-formed Butcher Gang members and a disfigured clone of Barley with Edgar's head attached. Fisher was first created in his ink corrupted form, from which his original toon counterpart was designed.

Powers and Abilities: Superhuman Physical Characteristics, Immortality (Types 1, 2, 3 and 8. He can't truly die until all of the ink is gone or destroyed and the Ink Machine is destroyed, if he dies he'll return to it and can reform from it), Regeneration (Low-High; He can reform from his ink or any ink), Elasticity (He can stretch his neck to swing his head like a wrecking ball), Intangibility (His ink physiology should allow him to go through walls the same way other ink creature can)