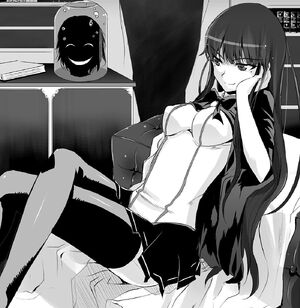 Fujiko Etou is one of the protagonists of Ichiban Ushiro no Daimaou. She is a Dark Magician acting as the Dormitory Leader of Constant Magic Academy who worships Akuto and wants to assure he'll become the Demon King who'll free mankind from the system of the gods.

Powers and Abilities: Superhuman Physical Characteristics, Magic, Matter Manipulation (Transformation magic allows her to change the composition of materials using mana), Poison Manipulation (Fujiko specializes in the creation of drugs and potions), Necromancy, Mind Manipulation (Can create drugs that control minds, Can force people to tell the truth with the energy irradiated by a necklace), Soul Manipulation (Can summon the souls of the dead), Animal Manipulation (Can control Demonic Beasts), Whip Mastery, Flight, Social Influencing (Her charm allows to command all girls in the academy as her army), Energy Projection (Can create mana balls), Clairvoyance (Can watch other people using her crystal ball), Precognition (Can have precognitive dreams), Light Manipulation (Can distort light to create a black curtain that covers 100 meters around her), Illusion Creation (Can show her opponents any image she wants), Can break forcefields, Resistance to Extrasensory Perception (Her black magic erases any trace of her presence). Cerberus has: Superhuman Physical Characteristics, Magic, Fire Breath

Attack Potency: Small Building level by herself (It's stated that everyone on Constant Magic Academy should be at least comparable to Act 1 Akuto Sai), Building level for Cerberus (Can fight Lily Shiraishi and Act 6 Junko Hattori with the Sword of Sohaya)

Speed: Average Human by herself, Subsonic for Cerberus (Keeps up with Lily)

Stamina: Every magician can gather mana from their surroundings, allowing them to constantly refill the amount of mana within themselves

Intelligence: She is considered the best student of Constant Magic Academy, possessing a vast knowledge of magic and potions as well as being a capable inventor who can build different types of equipment

Weaknesses: Not a good fighter and lacks combat experience, having to rely on Cerberus most of the time.