All Fiction Battles Wiki
Register
Don't have an account?
Sign In
Advertisement
in: Characters, Web Comic, Internet,
and 42 more 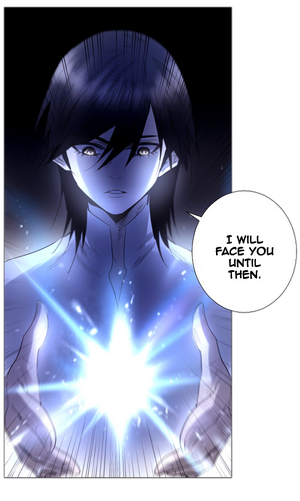 Gabramelek (가브라멜렉) is the leader of Pluto, who intends to destroy god and become supreme. He was the one to capture Jin-woo Cha and Min-ha Oh and had them make a contract with him. Gabramelek was formally a human who became a Demon with the unique ability to travel to various parallel universes. He is shown to be a calculating, manipulative demon who also is very patient, as he always gets what he wants when he wants it.

Classification: Leader of Pluto, God of the New World, Transcendental Being of the Parallel Worlds

Superhuman Physical Characteristics, Flight, Fate Manipulation, Mind Manipulation and Mind Control (Can manipulate people's fate through contracts and take away their wills), Dimensional Travel (His main ability is to travel through universes. Having survived and completed "Hell's Pilgrimage", twice in different bodies as stated by Mephistopheles), Invisibility (Supernatural beings such as angels, demons and souls are naturally invisible to normal people), Telekinesis (Lifted with his mind Cha Jin-woo and Oh Min-ha with ease and maintained for some time), Fear Manipulation (Passively causes everyone around him to feel fear even greater than death itself), Biological Manipulation (Passively causes his cells to evolve to the point it surpasses the ones of the Pluto. This evolution being so strong his previous body couldn't contain him anymore and destroyed his soul), Soul Manipulation and Non-Physical Interaction (Lesser demons are capable of manipulating souls.), Immortality (Types 1, 3 and 7, all soul demons are the souls of dead humans), Life Manipulation, Biological Manipulation, Possession (Soul demons have the natural ability to remove souls from people's bodies and replace them, they can do this infinitely. Soul demons can insert parts as small as a cell of their bodies within other people and consume and replace their neuron system and kill at any given moment. Can easily switch between bodies), Afterimage Creation, Aura, Nonexistent Physiology (Type 1, Destroyed his own soul. In Soul Cartel, the soul is what makes up a being is what allows it to even use its powers, and its destruction makes the being as whole vanish from existence to the point it is needed one of the objects of God to bring it back instead of using the normal reincarnation system)

All previous powers plus Can create spaces where nobody can enter without Gabramelek's permission, Spatial Manipulation (Can endlessly expand the space within his universe, making it seemingly infinite), Information Analysis (Can analyze the power and skills of anyone within his 12 universes), Creation and Black Hole Creation (Using the Particles of his Universe, Gabramelek can create anything. He used the Particle to create a small planet which he then uses as an attack. He then goes on to create an actual Black Hole), Duplication (Can replicate anything he creates, he makes multiple small planets just to show off), Physics Manipulation and Gravity Manipulation (Can manipulate physics to the point he can amplify gravity, and even change its functionality), Existence Erasure (Seventh Commandment can completely remove anyone from existence that's caught in its path), Time Manipulation (Eighth Commandment grants Gabramelek control over all time, being able to stop, slow, reverse and loop time ), Power Mimicry (Gabramelek can copy anything within his Universe once and only once. His original goal was to copy God's ability to create Life but he decides he'd rather copy Lucifer's power of Armageddon to destroy all things), Immortality (Type 5) and Transduality (Type 1:His World is stated to exist beyond and completely different than the normal world which includes things such as existence and non-existence, life and death), Fusionism (Merged his universe with God's Universe), Acausality (Types 1 and 4; Comparable to Cha Shi-Hun who can remember everything despite time being reversed and even exist after time was destroyed. His own universe is completely unbounded and outside the normal universe's laws, additionally anyone who are in his universe are bounded by his own laws Exist in his own flow of time and causality which is completely different to the one in the normal universe)

All previous powers plus Absorption (Absorbed The Big Bang, in addition to other sources of energy within the Universe), Summoning (Can summon his twelve universes), Resistance to Mind Manipulation and Soul Manipulation (Transcendental beings transcend mind and soul)

Attack Potency: Low Multiverse level (Created his own Universe and 12 other universes - is capable of destroying all the universes he created.)

Durability: Low Multiverse level (Has the power of 12 universes infused into his being and can easily sacrifice all of them without seemingly being affected)

Intelligence: Genius (Extremely manipulative due to him deceiving and luring Archangel Michael into his fake hideout, manipulated the likes as Mastema and Beelzebub, treated the likes of Faust and Gairon as pieces of his plan. Planned to kill God)

Weaknesses: All soul demons are weak in a certain element | Same as before. Plus, his powers only work in his world. When he uses his time control he cannot use any of his other powers | Same as Before