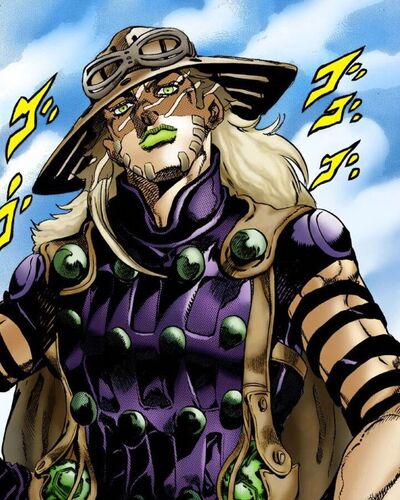 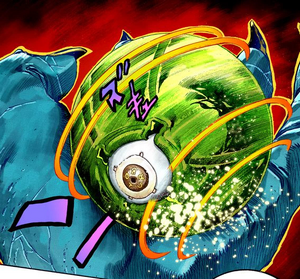 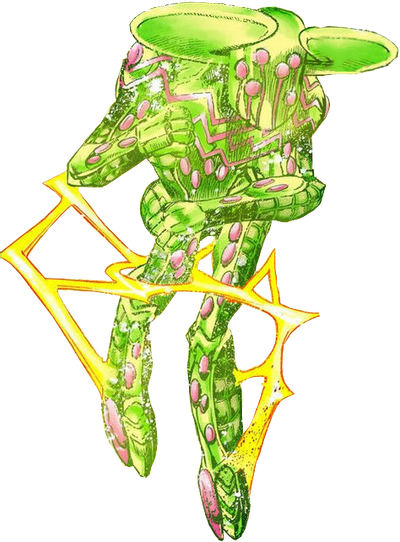 Gyro Zeppeli, born Julius Caesar Zeppeli, is one of two main protagonists in JoJo's Bizarre Adventure Part VII: Steel Ball Run. An Italian doctor and executioner who masters the art of the Spin, he enters the Steel Ball Run race in order to obtain an amnesty for an innocent child marked for execution. Before the race begins, he encounters Johnny Joestar and indulges in teaching him the Spin.

Superhuman Physical Characteristics, Enhanced Senses, Extrasensory Perception (Capable of seeing ghosts and souls among some other supernatural forces that are normally otherwise invisible, unlike most Stand Users, Gyro managed this before his Stand fully manifested), Instinctive Reactions, Martial Arts & Weapon Mastery (An extremely skilled swordsman and executioner who also learned martial arts. He's a master of the Spin technique and his steel balls and various other spherical objects), and eventually Summoning (Of his Stand). Healing with the Zombie Horse

Homing Attack, Can use the following powers on himself or other targets upon contact with his Steel Balls: Biological Manipulation (Can manipulate muscles, spin water out of targets bodies and make them return to them), Body Puppetry, Paralysis Inducement, Limited Elasticity, Empathic Manipulation (Can calm others with the Spin), Statistics Amplification (With the Guard Technique and making habits explode in bursts), Air Manipulation, Light Manipulation, Illusion Creation, Earth Manipulation, Water Manipulation, Damage Transferal, Sonar, Sensing of vibrations, Non-Physical Interaction (Stands can interact with ghosts and other Stands), limited X-Ray Vision

X-Ray Vision and Multiple Vision, Summoning of the Corpse Part Guardian (Which has Invisibility, and Non-Physical Interaction)

Same as before, Summoning (Of the Stand Ball Breaker, which embodies the vast quantity of energy collected by a Steel Ball when thrown with Super Spin by the manipulation of energy on a cellular level), Stand Physiology, Aura, Dimensional Bypassing/Spatial Manipulation, Pain Manipulation (Can make others not feel pain from his attacks), Age Manipulation (Aged Valentine's left side of his body, later aging his right side), Gravity Manipulation, Resistance Negation, Soul Manipulation (Using the Infinite Rotation's power of gravity, Gyro can force the target and their soul to obey the laws of physics), Resistance to Probability Manipulation, Time Stop and BFR (Bypassed Love Train's redirection of misfortune onto other areas of the world)

Attack Potency: Wall level (Destroyed a wooden door. Casually kicked down a door to a church), Multi-City Block Level with Steel Balls (Able to wound one of D4C's wrist and even break a couple of its fingers), up to High Universe level with Ball Breaker (Ball Breaker is the visualization of the energy of Gyro's balls, being able to bypass Love Train, pierce trought and destroy dimensonal walls with Infinite Rotation)

Range: Over at least 30 meters with his Steel Balls, High Universal with Infinite Rotation (Comparable to Johnny)

Standard Equipment: Numerous Steel Balls, Scan, Valkyrie (His horse), The Zombie Horse (A long piece of thread that heals wounds and can reattach mutilated body parts as well as mending some internal damage), pieces of the holy corpse and Ball Breaker (His Stand)

Weaknesses: He needs to be on his horse to perform the Super Spin. His Steel Balls lose power after 20-30 meters.